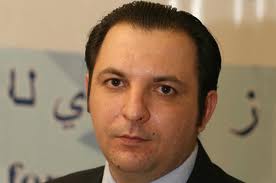 Syrian free speech campaigner Mazen Darwish is to be judged in secret by a military court and may be sentenced to death without any right to defense, appeal or review, the Geneva-based International Commission of Jurists said on Wednesday.

Syria’s Air Force Intelligence, which arrested Darwish on February 16, has decided he should be prosecuted by a Military Field Court, the ICJ said in a statement, without revealing the source of the information.

Military Field Courts are composed of military judges and have jurisdiction over crimes committed during wartime and military operations, said the ICJ, a body of 60 lawyers that seeks to promote the rule of law around the world.

“Accused persons before these courts have no right to defense and proceedings are conducted in secret. These courts do not apply existing laws or procedures and their decisions are final, not subject to any form of appeal or review. Under Legislative Decree 109, Mazen Darwish may face the death penalty,” it said.

Darwish, a lawyer who is also president of the Center for Media and Freedom of Expression, was arrested along with 16 of his colleagues, some of whom have been prosecuted by the Military Court of Damascus for “possessing prohibited materials with the intent to disseminate them”, the ICJ said.

The ICJ called on the Syrian authorities to immediately and unconditionally release Darwish. It said he had been “subject to forced disappearance” and the authorities had revealed nothing about his fate or whereabouts since his arrest.