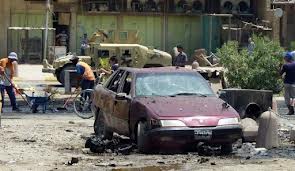 A car bomb killed 11 people when it exploded shortly after sunset Wednesday near a gathering of Shiite Muslims south of Baghdad, Iraqi officials said, the latest apparent sectarian attack in the increasingly troubled country.

Police and hospital officials said the bomb went off close to a tent where people were gathered for a religious ceremony near the town of Suwayrah, 40 kilometers (25 miles) south of the Iraqi capital. They said 40 people were wounded in the blast.

Violence has declined in Iraq since its height between 2005 and 2008, but attacks continue almost daily. There has been a steady increase since U.S. troops completed their withdrawal last December. Al-Qaida has declared its intention to take back areas from which the U.S. and its local allies expelled the militants.

The bomb went off Wednesday just after “iftar,” the ceremonial breaking of the daily fast during the holy month of Ramadan, when families and friends gather for a festive meal.

Khalil Ali, a nearby resident, said he was about to leave his house after finishing his iftar meal when he heard a big explosion.

“Everybody rushed to the blast area. I saw the tent on fire and bodies … scattered all over the place. The scene was horrific,” he said. “Nobody here expected an attack like this. The security measures were light because we thought that our area is safe and free of violence.”

There was no immediate claim of responsibility. Attacks on Shiites are often attributed to al-Qaida’s local wing in Iraq.

The blast brought to at least 19 the number of people killed in Iraq on Wednesday.

Hours earlier, gunmen shot dead eight members of a family inside their house north of Baghdad.

Police said the assailants broke into the home of a well-known lawyer in the city of Beiji, 250 kilometers (150 miles) north of the capital. They killed him, his wife, his five sons and a relative. Police said they did not know the motive.

A health official in the city’s hospital confirmed the casualty figures.

All officials spoke on condition of anonymity as they were not authorized to release information to reporters.

The oil center of Beiji is a former stronghold of Sunni insurgents.

The attack followed a threat last month by al-Qaida’s Iraq branch to kill judges and investigators.

Al-Qaida’s local wing in Iraq is known as the Islamic State of Iraq, and has for years had a hot-and-cold relationship with the global terror network’s leadership.

Both shared the goal of targeting the U.S. military in Iraq and, to an extent, undermining the Shiite government that replaced Saddam Hussein’s regime. Al-Qaida leaders Osama bin Laden and Ayman al-Zawahri distanced themselves from the Iraqi militants in 2007 for killing Iraqi civilians instead of focusing on Western targets.

Generally, al-Qaida in Iraq does not launch attacks or otherwise operate beyond Iraq’s borders. But in early 2012, al-Zawahri urged Iraqi insurgents to support the Sunni-based uprising in neighboring Syria against President Bashar Assad, an Alawite. The sect is a branch of Shiite Islam.