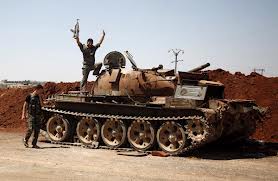 Syria launched a ground assault Wednesday on rebel-held areas of the besieged city of Aleppo, the center of battles between government forces and opposition fighters for more than two weeks.

It was not immediately clear if the offensive was “the mother of all battles” that Syria’s state-controlled media vowed last month would take place for control of Aleppo. In recent weeks, the regime’s blistering attacks on rebel positions seem to have slowly chipped away at the opposition’s grip on its strongholds in the country’s largest city.

The official SANA news agency said regime forces have fully regained control of the Salaheddine neighborhood, the main rebel area in Aleppo. It claimed the “fall” of hundreds of “armed terrorists,” the government’s catchall term for its opponents, without specifying what that meant.

Rami Abdul-Rahman, the director of the Britain-based Syrian Observatory for Human Rights, said troops met resistance in the offensive.

About 25 miles (40 kilometers) north of Aleppo, Syrian fighter jets carried out airstrikes early Wednesday on the village of Tel Rifat, hitting a home and a high school and killing six people from the same family, residents said.

Resident Mohammed Zakkour, 35, said the sound of the jets and blasts jolted him awake and he left his house to see a huge cloud of dust and smoke rising above the village.

Hours later, all that remained of a small home in the village was a tangled pile of rubble and iron bars. A bouquet of plastic red flowers poked out of the rubble, and clothes still hung from one of the few walls that remained standing.

There was a large bloodstain on a rock where residents said they found one of the bodies.

“The bodies were under the rubble,” Zakkour said. “Some were cut in half and parts of them had been blown onto the neighbors’ roofs.”

Neighbors said the six were members of the Blaw family: the grandfather, his adult daughter and son, the son’s wife and two of their cousins.

Other strikes left two car-sized craters in the courtyard of the adjacent Tadamor Girls’ High School. 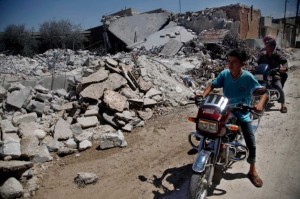 It was unclear why the area was targeted. Residents said government forces often shelled the village, but that this had been the first airstrike. They acknowledged that there were some rebels in the village, though an Associated Press reporter saw no armed men during a brief drive through the area.

Residents said the Blaw family was not involved in the uprising.

“They were simple farmers who had a tractor and a car wash,” Zakkour said. “They never had anything to do with politics.”

The international community has widely condemned the Syrian regime’s use of fighter planes in the civil war. The attention has focused on the struggle for Aleppo, but Wednesday’s attack shows that the regime is using such methods elsewhere.

Chaos is mounting inside Syria as the country’s civil war deepens. President Bashar Assad’s regime has suffered a series of setbacks over the past month: Four senior security officials were assassinated in Damascus, there have been a string of high-level defections including the prime minister this week, and government forces have struggled to put down rebel challenges in Damascus and Aleppo.

But the regime has far more powerful weapons than the rebels and retains a firm grip on much of the country.

Aleppo, Syria’s commercial center, holds great symbolic and strategic importance. Some 25 miles (40 kilometers) from the Turkish border, it has been a pillar of regime support during the uprising. An opposition victory there would allow easier access for weapons and fighters from Turkey, where many rebels are based.

A foreign diplomat in Turkey told The Associated Press on Wednesday that the rebels were likely not receiving any heavy weapons, making any chance of their taking over Aleppo exceedingly low. The diplomat asked that his name and details of his position not be published because he was not authorized to speak to the media.

There has been a marked increase in the number of refugees fleeing to Turkey in the past two days as Aleppo-based activists reported fresh clashes.

Some 3,350 people crossed the border overnight and Wednesday to escape the escalating violence, Turkey’s state-run news agency reported Wednesday. Some 50,000 Syrians have now found refuge in Turkey. Even more refugees have crossed into Jordan and Lebanon.

“Unfortunately, there is a human tragedy going on in Syria,” Turkey’s Deputy Prime Minister Ali Babacan said Wednesday, keeping up Turkey’s criticism of the violence.

The regime has been hit by a wave of defections, most recently by Prime Minister Riad Hijab.

The rebel Free Syrian Army and a Jordanian security official said Hijab arrived in Jordan on Wednesday, two days after hiding in a “safe location” inside Syria near the border.

FSA leader Ahmed Kassem, who told The Associated Press on Monday that Hijab had defected to Jordan, said Wednesday that he had actually been inside Syrian territory for the past two days waiting to cross. He said his earlier account was meant to “confuse the Syrian regime over the prime minister’s whereabouts.”

A Jordanian security official said Hijab’s escape was coordinated between the Jordanian army and FSA. He insisted on anonymity because he is not allowed to speak to the media.

Assad has been forced to rely on a shrinking list of allies, including Iran. Senior Iranian envoy Saeed Jalili visited Damascus on Tuesday, appearing with Assad in a show of solidarity.

The rebels have blasted Iran’s influence in the country, and over the weekend rebel forces intercepted a bus carrying 48 Iranians and kidnapped them. Rebels claimed the men are military personnel, including some members of Iran’s powerful Revolutionary Guard who were on a “reconnaissance mission” to help Assad’s crackdown on the uprising.

Iran initially said the 48 were pilgrims visiting a Shiite shrine in Damascus. The Iranian foreign minister said Wednesday that some of the kidnapped Iranians are retired members of the army and Revolutionary Guard.

“The Islamic Republic of Iran has announced openly that some of the pilgrims kidnapped are retired members of the Guard and the Army,” Iran’s official IRNA news agency quoted Salehi as saying during a visit to Turkey.

“If these people had been dispatched to Syria for specific purposes, then how did they drive in a normal bus without equipment and holding their identification cards?” Salehi asked.