A Twitter account claiming to represent Vladimir Kolokoltsev, the Russian interior minister, tweeted at 9:59 a.m. EDT that Syrian President Bashar al-Assad had been killed or injured, followed by two tweets claiming to confirm the death.

In the age of rapid-fire tweets, “a well-placed story can move the market, and that looks like what happened,” said Phil Flynn, an analyst at Price Futures Group.

The Russian Interior Ministry denied issuing the statement and told Reuters it was unconnected to the Twitter account. 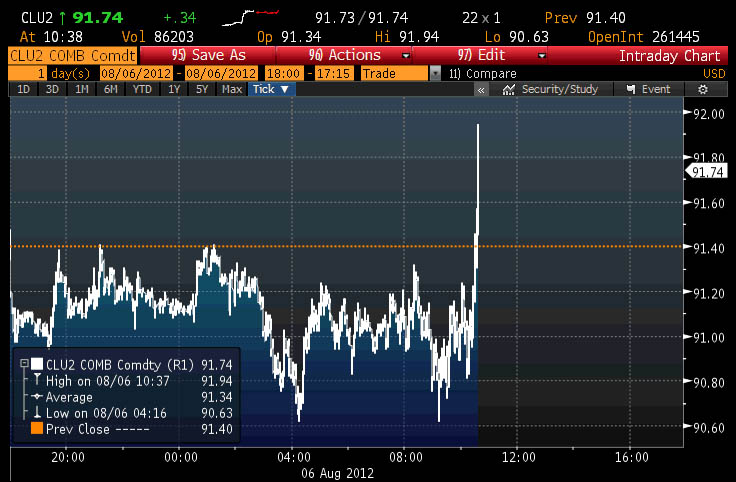 The oil markets always have kept a close eye on developments in the crude-rich Middle East, but that scrutiny has ratcheted up by the current conflict between the West and Iran over Tehran’s nuclear weapons program. The West has imposed sanctions. Iranian officials have threatened to retaliate by closing down the Strait of Hormuz, through which a third of the world’s seaborne crude passes.

Traders and analysts said fears that Iran would disrupt oil supplies has kept prices for the benchmark U.S. crude above $80 a barrel recently despite a shaky outlook for global economic growth and oil demand.

“The markets are paying a lot of attention to what’s going on in the Middle East,” said Peter Donovan of Vantage Trading.

Syria, the focus of the rumor, produces little oil. However, market participants said they are worried that Iran would react because it is a major supporter of the Assad regime.

The rumor was circulated by traders through email and instant messages. “I heard it not so much in the Twitterverse as in the big-mouth-verse,” said Tom Kloza, publisher and chief oil analyst of the Oil Price Information Service.

The quick spread of rumors isn’t a new phenomenon for the oil markets. Mr. Kloza said before both electronic trading and electronic communication, rumors would “sweep through the floor,” passing from one trader to the next.

The oil spike quickly reverted, but not entirely, as a weaker dollar supported prices for the rest of the session. Light, sweet crude for September delivery rose 80 cents, or 0.9%, to settle at $92.20 a barrel on the New York Mercantile Exchange, the highest settlement price since July 19. Trading volumes were at about 60% of the 12-month average Monday, making price moves more exaggerated in the thinly traded markets.

Though the report turned out to be false, Mideast unrest is “always a background” to the market, said Andy Lebow, a trader and broker for Jefferies.