A senior Syrian intelligence officer defected to Jordan, Al Arabiya television reported on Sunday, as Syrian army and opposition forces clashed in key areas around the cities of Aleppo and Damascus.

Colonel Yaraab Shara, head of the information division at the Political Security in Damascus, a key tool in suppressing dissent, has fled to Jordan, Al Arabiya television reported.

The high profile defection came as the 17-month uprising against Syrian President Bashar al-Assad intensified to battles around the airport in the northern city of Aleppo on Sunday.

“Fighter jets are being used to pound Shaar and Sakhur,” Rami Abdel Rahman of the Syrian Observatory for Human Rights told AFP.

Earlier, clashes broke out between troops and rebels in the districts of Ansari, Hamdaniyeh and Sukari in Aleppo, scene of heavy fighting since July 20, the Observatory said, adding at least 44 people were killed across Syria on Sunday. Of those killed, 28 were civilians, 10 were soldiers and six were rebel fighters, it added.

After U.N. Security Council paralysis on Syria forced peace envoy Kofi Annan to resign last week, and with his ceasefire plan a distant memory, rebels have been battered by the government onslaught in Aleppo and the capital Damascus.

State television said Assad’s forces were “cleansing the terrorist filth” from the country, which has been sucked into an increasingly sectarian conflict that has killed some 18,000 people and could spill into neighboring states.

Both cities – vital prizes in the battle for Syria – were relatively free of violence until last month, when fighters poured into Damascus shortly before a July 18 bomb killed four of Assad’s inner circle, and entered Aleppo days later.

Rebel commanders say they anticipate a major Syrian army offensive in Aleppo and one fighter said they had already had to pull back from some streets after army snipers advanced on Saturday under cover of the fierce aerial and tank bombardment.

“The Syrian army is penetrating our lines,” said Mohammad Salifi, a 35-year-old former government employee. “So we were forced to strategically retreat until the shelling ends,” he said, adding the rebels were trying to push the army back again. 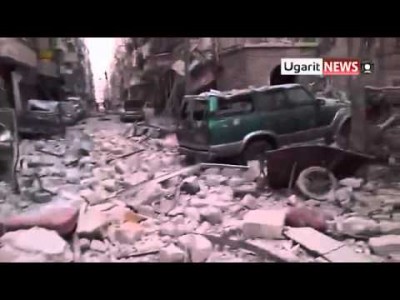 Once a busy shopping and restaurant district where residents would spend evenings with their families, Aleppo’s Salaheddine district is now white with dust, broken concrete and rubble.

Tank shell holes gape wide on the top of buildings near the front line, and homes of families and couples have been turned into look outs and sniper locations for rebel fighters.

Civilians trickle back to collect their belongings and check on their homes. A couple stood shaking with fear at an intersection a few meters from the fighting as a medic waved a car down to help take them to safety.

“Just to hold power he is willing to destroy our streets, our homes, kill our sons,” wept Fawzia Um Ahmed, referring to Assad’s determined counter-offensive against the rebels.

“I can’t recognize these streets anymore.”

Update: Sources have told Al Jazeera that several Syrian intelligence officials have defected to Jordan. They include Colonel Yaarab Sharaa, said to be the head of the Damascus branch of Political Security; his brother Lieutenant Kinan al-Sharaa; Colonel Yaser Matar al-Haj Ali; Colonel Dr Ahmad Hassan al-Haj Ali; and Colonel Tawfiq Mohammad al-Haj Ali. They are all under the care of the Jordanian army at a military base, the sources said.