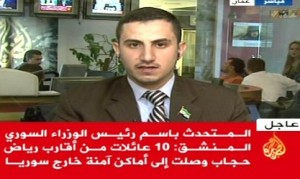 Mohammad Ottari ( pictured) , who claims to be a spokesman for Syrian Prime Minister Riad Hijab, says the former prime minster defected with 10 families, including his eight brothers.

Two of those brothers were ministers in the oil and environment departments, according to a translation from journalist Hassan Hassan.

Speaking to al-Jazeera Arabic Ottari also claimed that the defection had been planned for months. If true this suggests his smuggling out was being worked up before he was even appointed prime minister in June.

Ahmad Kassim, a senior official with the Free Syrian Army, told AP that Hijab defected to Jordan along with three other ministers. The other ministers’ identities were not immediately known, it said.