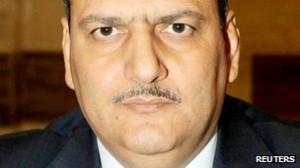 Mr Hijab was appointed less than two months ago and his departure is the highest-profile defection since the uprising began in March 2011.

His family is reported to have fled Syria with him.

A Sunni Muslim, Riad Hijab comes from the Deir al-Zour area of eastern Syria which has been caught up in the revolt.

Mr Hijab is the first cabinet minister to defect. The BBC’s Dale Gavlak in Jordan says the development underscores the cracks in the regime which are reaching beyond military ranks.

A month ago, Brig Gen Manaf Tlas, who was considered close to President Assad, also defected.

Thirty other generals have crossed the border into Turkey.

Syrian state TV reported that the prime minister was sacked but gave no immediate explanation.

His replacement, Omar Ghalawanji, will reportedly lead a caretaker government.

Hours earlier, state TV said a bomb had gone off on the third floor of the Syrian state TV and radio building in Damascus, wounding three people.

“I announce today my defection from the killing and terrorist regime and I announce that I have joined the ranks of the freedom and dignity revolution. I announce that I am from today a soldier in this blessed revolution,” Hijab said in a statement read in his name by his spokesman Mohammad Ottari

He said his defection comes at a time “when Syria is passing through the most difficult war crimes, genocide, and barbaric killings and massacres against unarmed citizensc.”

The spokesman said Hijab was in a safe place.