3 prominent US senators calls for aid to Syrian rebels 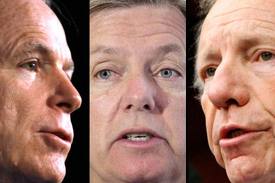 THREE prominent US senators have called for direct US military aid to Syrian rebels, including use of US air power to protect rebel-controlled areas in the country.

The senators — John McCain, Joseph Lieberman and Lindsey Graham – said in an op-ed piece in The Washington Post they were aware of the risks associated with deepening US involvement in the conflict in Syria.

“But inaction carries even greater risks for the United States — in lives lost, strategic opportunities squandered and values compromised,” they argued.

The senators said the United States should “directly and openly” provide assistance to the armed opposition, including weapons, intelligence and training.

“Whatever the risks of our doing so, they are far outweighed by the risks of continuing to sit on our hands, hoping for the best,” they said.

The authors noted that US help should go to those groups that reject extremism and sectarianism in both word and deed.

The senators said the United States should work with its allies to reinforce those areas within Syria that the rebels have established as de facto safe zones.

“This would not require any US troops on the ground but could involve limited use of our airpower and other unique US assets,” they wrote.

The lawmakers did not specify what assets they had in mind.

The senators warned that because of its reluctance to assist the Syrian rebels, the United States is increasingly seen across the Middle East as acquiescing to the continued slaughter of Arab and Muslim civilians.

“This reluctance to lead will, we fear — like our failure to stop the slaughter of the Kurds and Shiites under Saddam Hussein in Iraq or of the Tutsis in Rwanda – haunt our nation for years to come,” they concluded.

The appeal came as Syrian regime warplanes pounded rebel positions in the country’s second city of Aleppo on Sunday ahead of a threatened ground assault by more than 20,000 troops assembled around the commercial capital.