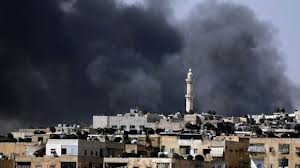 Syrian army tanks shelled Aleppo and a helicopter gunship strafed rebel positions with heavy machinegun fire as they fought into early Monday for control of the country’s biggest city and key battleground of the 17-month uprising.

After U.N. Security Council paralysis on Syria forced peace envoy Kofi Annan to resign last week, and with his ceasefire plan a distant memory, rebels have been battered by a government onslaught in Aleppo and the capital Damascus.

The main focus of fighting in Aleppo has been the Salaheddine district, a gateway into the city of 2.5 million people, where Reuters witnessed heavy fighting.

Tanks pounded alleyways where rebels sought cover. One shell hit a building next to the Reuters reporting team, pouring rubble on to the street and sending billows of smoke and dust into the sky.

State television said Assad’s forces were “cleansing the terrorist filth” from the country, which has been sucked into an increasingly sectarian conflict that has killed about 18,000 people and could spill into neighbouring states.

In Damascus, troops backed by fighter jets have kept up an offensive against the last rebel bastion there in recent days.

Syria’s two main cities had been relatively free of violence until last month when fighters poured into them, transforming the war. The government largely repelled the assault on Damascus but has had more difficulty recapturing Aleppo.

Rebel commanders say they anticipate a major Syrian army offensive in Aleppo and one fighter said they had already had to pull back from some streets after army snipers advanced on Saturday under cover of the fierce aerial and tank bombardment.

“The Syrian army is penetrating our lines,” said Mohammad Salifi, a 35-year-old former government employee. “So we were forced to strategically retreat until the shelling ends,” he said, adding the rebels were trying to push the army back again.

Late on Sunday rebels clashed with the army in Aleppo’s south-eastern Nayrab district, a fighter who called himself Abu Jumaa said. The army responded by shelling eastern districts. There were also clashes on the southern ring road, which could be a sign the army was preparing to surround the city.

Once a busy shopping and restaurant district where residents would spend evenings with their families, Aleppo’s Salaheddine district is now white with dust, broken concrete and rubble.

Tank shell holes gape wide on the top of buildings near the front line, and homes of families and couples have been turned into look-outs and sniper locations for rebel fighters.

Large mounds of concrete are used as barriers to close off streets. Lamp posts lie horizontally across the road after being downed by shelling.

Civilians trickle back to collect their belongings and check on their homes. Late on Saturday a confused elderly man stumbled into 15th street as rebels exchanged fire with the army.

“Get out of the way! Get off the street!” fighters shouted, grabbing him and taking him to shelter.

“I just wanted to buy some blackberry juice,” he told the fighters, his face reflecting confusion and horror at the damage to his street. Instinctively, he took his personal ID out of his chest pocket to show the rebels, a habit from the strict days of the Assad security officials.

During the day, others emerged from damaged buildings. A couple stood shaking with fear at an intersection a few metres from the fighting as a medic waved a car down to take them to safety.

“Just to hold power he is willing to destroy our streets, our homes, kill our sons,” wept Fawzia Um Ahmed, referring to Assad’s determined counter-offensive against the rebels.

“I can’t recognise these streets any more.”

The violence has elements of a proxy war between Sunni and Shi’ite Islam which could spill beyond Syrian borders.

Assad is a member of the Alawite faith, an offshoot of Shi’ite Islam that has dominated Syrian politics through more than 40 years of his family’s rule in a country that has a Sunni Muslim majority. He is supported by Shi’ite Iran and by Lebanon’s armed Shi’ite Hezbollah movement.

The Sunni-ruled Muslim Gulf Arab states have called for rebels to be armed and Turkey has provided them with a base, angering Damascus and prompting Syrian state television on Sunday to refer to the rebels as a “Turkish-Gulf militia”.

It said the bodies of Turkish and Afghan fighters had been found in Aleppo, without giving details.

On Sunday Syrian rebels claimed responsibility for capturing 48 Iranians in Syria and said they were checking their identities to show that Tehran was involved in fighting for Assad, a rebel officer said.

Iran says the captives were religious pilgrims visiting holy sites in Syria, abducted from a bus in Damascus. It has called on Turkey and Qatar to help secure their release.

In Damascus, residents said the bodies of six Palestinians arrested during a security sweep by the army in the southern Tadamon district were discovered on Sunday. Another nine men were missing, they said. Accounts from the capital could not be verified because the government restricts access.