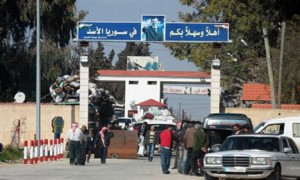 About 600 Palestinian families arrived in Lebanon from Syria, most of them fleeing violence at the Yarmuk refugee camp in Damascus, a Palestinian official in Lebanon said on Sunday.

“Some 600 Palestinian families have arrived in Lebanon’s Palestinian refugee camps in the past three days,” said Marwan Abdel Aal of the Lebanese branch of the Popular Front for the Liberation of Palestine.

“Most of these families came from Yarmuk camp,” he added.

On Thursday, 21 people were killed in Yarmuk when regime forces shelled the area, according to the Britain-based Syrian Observatory for Human Rights.

“Most of the families have sought shelter in the Jalil and Taalabaya camps in the Bekaa region” of eastern Lebanon, Abdel Aal told AFP.

“Another 50 families went to Nahr al-Bared (north Lebanon), 28 went to Baddawi (north), while the rest went to Ain al-Hilweh near Sidon,” in south Lebanon, he added.

Abdel Aal said the recent violence had triggered an exodus from the Yarmuk camp sheltering people displaced from the central Syrian city of Homs, and families forced by clashes to leave their homes in parts of Damascus.

The Palestinian official said there were fears that more families would make their way to Lebanon in the coming days.

“There are still families on the Syrian side of the border, waiting for permission from the Syrian authorities to cross over,” Abdel Aal said.