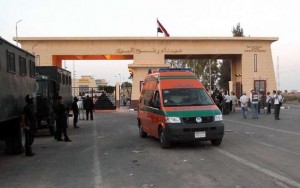 Israel said the attackers, who were in two vehicles, then tried to smash their way across the border.

The Israeli military said one vehicle was destroyed from the air, while the other blew up at the crossing.

It is not clear who carried out the border raid. Egyptian state television blamed Islamist militants.