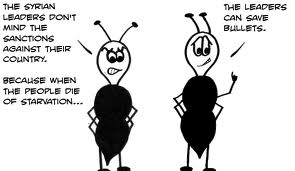 Syria reached out to its powerful ally Russia on Friday, as senior officials pleaded with Moscow for financial loans and supplies of oil products — an indication that international sanctions are squeezing President Bashar Assad’s regime.

The signs of desperation came as resilient rebels fought regime forces in the Syrian capital only two weeks after the government crushed a revolt there. The renewed battles in Damascus show that Assad’s victories could be fleeting as armed opposition groups regroup and resurge.

“The fighting in Damascus today proves that this revolution cannot be extinguished,” said activist Abu Qais al-Shami. “The rebels may be forced to retreat because of the regime’s use of heavy weaponry but they will always come back.”

Syria is thought to be burning quickly through the $17 billion in foreign reserves that the government was believed to have at the start of Assad’s crackdown on a popular uprising that erupted in March 2011. The conflict has turned into a civil war, and rights activists estimate more than 19,000 people.

Deputy Prime Minister Qadri Jamil, who has led a delegation of several Cabinet ministers to Moscow over the past few days, told reporters Friday that they requested a Russian loan to replenish Syria’s hard currency reserves, which have been depleted by a U.S. and European Union embargo on Syrian exports.

He said Damascus also wants to get diesel oil and other oil products from Russia in exchange for crude supplies.

“We are experiencing shortages of diesel oil and gas for heating purposes,” Syrian Oil Minister Said Maza Hanidi said in Moscow. “This unfair blockade has hurt all layers of the population.”

The Syrian regime has blamed sanctions for shortages that have left Syrians across the country standing in long lines to pay inflated prices for cooking gas, fuel, sugar and other staples.

Syrian officials refused to mention specific figures but said that deals with Moscow could be finalized within weeks. There was no immediate comment from the Russian government.

While the Syrian delegation was holding talks in Moscow, a squadron of Russian warships was approaching Syria’s port of Tartus, the only naval base Russia has outside the former Soviet Union.

Russian news agencies reported that two of the three amphibious assault ships will call at Tartus while the third will cast anchor just outside the port.

They said that each of the three ships is carrying about 120 marines backed by armored vehicles. It wasn’t immediately clear whether some of the marines will stay to protect Tartus. Some Russian media said the marines were supposed to ensure a safe evacuation of Russian personnel and navy equipment from the base if necessary.

Russia has protected Syria from U.N. sanctions and continued to supply it with weapons throughout the conflict. The Kremlin, backed by fellow veto-wielding U.N. Security Council member China, has blocked any plans that would call on Assad to step down.

On Friday, the U.N. General Assembly overwhelmingly denounced Syria’s crackdown in a symbolic effort meant to push the deadlocked Security Council and the world at large into action on stopping the civil war.

Before the vote, Secretary-General Ban Ki-Moon accused the Syrian regime of possible war crimes and drew comparisons between the failure to act in Syria with the international community’s failure to protect people from past genocide in Srebrenica and Rwanda.

“The conflict in Syria is a test of everything this organization stands for,” Ban said. “I do not want today’s United Nations to fail that test.”

“The draft resolution will have no impact whatsoever. It is a piece of theater,” he told reporters after the vote. And Iran’s No. 2 ambassador, Eshagh Alehabib, called the resolution “one-sided.”

Assad’s regime stands accused of a number of massacres in which hundreds of civilians, including women and children, were killed. The Syrian government blames gunmen driven by a foreign agenda for the killings, but the U.N. and other witnesses have confirmed that at least some were carried out by pro-regime vigilante groups, known as shabiha.

But the recent emergence of videos showing summary executions committed by rebel forces — albeit on a far smaller scale than the regime’s alleged atrocities — is making it more difficult for the Syrian opposition to claim the moral high ground.

With the civil war becoming increasingly vicious, chances for a diplomatic solution were fading after the resignation Thursday of Kofi Annan, the U.N.-Arab League envoy to Syria. Annan cited divisions within the Security Council preventing a united approach to stop the fighting.

The fighting continued Friday in the country’s two most important cities, Aleppo and Damascus.

In Damascus, residents reported loud explosions and plumes of smoke over the southern edge of the city Friday, as frightened people stayed at home.

“The bombs are back, I have been hearing explosions all day,” a resident of central Damascus told The Associated Press, asking to remain anonymous for fear of reprisals.

Government forces crushed a rebel assault on Damascus two weeks ago, but pockets of resistance remain including the southern neighborhood of Tadamon, where most of Friday’s fighting took place.

Late Friday, Syria’s official news agency SANA said government forces had hunted down the remnants of the “terrorist mercenaries” — its term for the rebels — in Tadamon. It said several were killed and many others wounded.

Al-Shami and other activists said troops backed by dozens of tanks and armored vehicles broke into Tadamon on Friday evening, forcing a fresh wave of residents spilling into nearby areas for shelter.

Nevertheless, there were signs that rebels may be planning another run on Damascus in an effort to drain the army’s resources as fighting stretches into its second week in Aleppo, 350 kilometers (215 miles) to the north.

The U.N. peacekeeping chief, Herve Ladsous, warned of a major government assault on Aleppo in the coming days to retake the rebel-held neighborhoods.

“The focus is now on Aleppo, where there has been a considerable buildup of military means,” he told reporters in New York late Thursday after briefing the Security Council on his trip to Syria. “We have reason to believe that the main battle is about to start.”