Lebanon: Some Syrian refugees resort to begging for survival 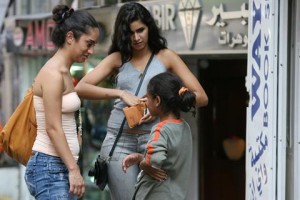 Hafiza has been staying with relatives since she arrived to Lebanon from Damascus 15 days ago. But her husband is sick, and she has no way to make money but to beg. Cradling her young daughter, Hafiza sits on the sidewalk in Hamra, Ras Beirut’s major thoroughfare.

People begging have long been a common sight in the neighborhood, with many, especially children, gathering in Hamra’s busiest areas to ask for money or to sell roses. Many of these are widely believed to be managed by gangs, their profits taken from them at the end of the day.

But there is a growing Syrian refugee presence among the area’s beggars, children and adults unable to support themselves any other way.

Hafiza and her family have been staying with relatives near Cite Sportive in Beirut since fleeing the Sayyida Zeinab area of the Syrian capital just over two weeks ago. She has seven children to support, and her youngest Eman, who is two and a half, has had a high fever for two days now.

“I have no money to buy my daughter medicine.”

Hafiza says that the Lebanese have been kind and generous since her arrival. On a busy Thursday evening, however, when the street is teeming with people, very few have stopped to talk to her or give her money, except when she is struggling to wake up Eman, and nearby shopkeepers bring her water and tissues.

The U.N. and partners are currently providing aid to over 35,000 Syrian refugees across the country, but the real total is thought to be far higher, possibly around 90,000, as so many have not formally registered with the U.N. High Commissioner for Refugees.

The vast majority of displaced Syrians are residing in north Lebanon or in the Bekaa, either with relatives, host families or in abandoned buildings renovated by charities. But as numbers have increased and the uprising in Syria has drawn on, more and more are coming to Beirut and the suburbs.

Raghda Serhal, sitting at a pavement cafe, says that while the majority of child beggars in the neighborhood have always been Syrian – alongside a handful of Turks, Lebanese and Palestinians – the overall number, and proportion, of Syrians is increasing.

She often chats with the children in the area and believes that “before, the Syrian children used to go back in the fall to go back to school, and their parents would bring them back to Lebanon to work in the summer. But this year, because of the situation in Syria, they have not gone back, and have remained in Lebanon.”

Sitting at another cafe nearby, Moussa al-Hajj also says he has noticed an increase in Syrian beggars in the area. While he believes the Lebanese government should be doing more to help them, he also questions the role of aid organizations.

“There are hundreds of nongovernmental organizations in Lebanon, where are they? Many of them simply do nothing.”

The government’s Higher Relief Committee – the emergencies body which had been working alongside the UNHCR to register refugees, fund medical care and distribute aid – announced last month that it would have to cease assistance to refugees, due to a lack of funds. However Cabinet announced Thursday a LL2 billion loan to the HRC, although it is not yet clear when this will kick in.

Hafiza was not aware of the UNHCR office, which is situated in Ramlet al-Baida in Beirut, but Dana Sleiman, UNHCR’s spokesperson in Beirut, tells The Daily Star that “We are known to be here, that’s how all refugees find us.”

However, she adds, the agency is working on highlighting the existence, and work, of the UNHCR.

“We are trying to conduct awareness campaigns in the field, and that would include Beirut,” she says.

Further down the street, Zeinab, 12, and her brothers Yusef, 7, and Mohammad, 6, are approaching passersby for money. “We are refugees,” they say.

The children live with relatives in Nabaa, and arrived recently from Aleppo in Syria, but Zeinab is not exactly sure when.

“Our school is gone and our house is gone,” she says.

The focus of fighting between rebels and regime forces has centered on Syria’s biggest city for the past two weeks now, with heavy shelling and casualties reported near daily.

In torn clothing, Yusef says that the Lebanese “have been treating us well and giving us money.” His younger brother adds, “God willing, we can go home soon, and go back to school.”