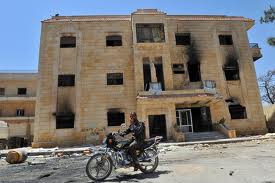 Syrian rebels said they took control of at least two important police stations in central Aleppo on Tuesday, maintaining their hold on several neighborhoods despite air assaults and shelling by government troops.

Nearly two weeks have passed since the fighting began for control of Aleppo, Syria’s largest city and commercial center, and both sides seem to be digging in for an extended battle.

The larger of the two police stations that rebels said they seized on Tuesday lies near the old city of Aleppo and its ancient iron gate. The second, smaller station is a few miles away, and rebels and activists described both locations as strategic because Syrian troops had been using them as bases, dividing rebel fighters in the surrounding neighborhoods.

“Since the beginning of the uprising, this criminal” — a common reference among rebels for President Bashar al-Assad — “transformed these stations into military centers,” said Col. Abdul Jabbar al-Okeidi, the head of the Aleppo military council of the Free Syrian Army, the largest armed resistance group in Syria. “There are no more policemen, just security forces and thugs and snipers.”

Analysts said the Syrian police had generally not been involved in Syria’s 17-month-old conflict, but police stations — as fortified government institutions inside neighborhoods — have become increasingly valuable military locations. Rebels said the Syrian Army had been using jail cells to hold captured rebel fighters, while gathering troops at the stations to stage attacks or fire from the rooftops.

The stations “also represent a source of intelligence and a network for information for the regime as well as a refuge for government officials,” said Elias Hanna, a retired Lebanese general and an expert on the Syrian military. “Taking over a police station means denying the government a presence in the area, and controlling it.”

The battles for the stations appear to have been bloody. The Syrian Observatory for Human Rights, an opposition group based in Britain, described the largest of the two stations as a three-story building occupied by dozens of officers and soldiers who were killed during a battle that lasted seven to eight hours. Colonel Okeidi said that about 50 Syrian soldiers had been captured, including a colonel — an assertion, like the others involving the death toll, that could not be independently verified.

Rebels also posted a video online that they said showed the second, smaller police station after fighting had ended. It included footage of rebel fighters with AK-47s walking through a ransacked, bullet-riddled station, stepping over at least a dozen bodies.

In the same area, rebels said they had captured several members of the Barri clan, a prominent Aleppo family close to the government of Mr. Assad. Rebels accused the clan of killing 15 fighters. One video posted online showed dozens of young men identified as Barri family members or associates with bloodied faces. Another showed several of them, including one man wearing only underwear, being executed outside in broad daylight.

Early this week, rebels said they seized an important checkpoint northwest of Aleppo, making it easier to move in supplies and troops from the Turkish border. But for residents of Aleppo, as the fighting has continued, basic needs have become harder to satisfy.

Several people in Aleppo said on Tuesday that gas and food were scarce or unavailable as shop owners stayed closed and families tried to hoard whatever they could. “There is no water or electricity in many areas,” said Abou Raed, an activist in Aleppo. “And the schools are now overcrowded with the displaced.”

He added, “People are not really moving out now because of the shelling.”

In neighborhoods across much of the city, residents said the streets were empty and quiet on Tuesday except for the sound of gunfire, helicopters and artillery shells.

Outside Syria, divisions among opposition groups appeared to deepen. The Council of Syrian Revolutionary Trustees, which is an offshoot of the Syrian National Council, the main opposition group in exile, nominated one of its own leaders, Haytham al-Maleh, to form a transitional government.

Mr. Maleh, a former political prisoner who resigned from the Syrian National Council over what he described as inefficiencies, said he would form a government including all sides of the opposition, arguing that a new government must be formed immediately to avoid a “political or administrative void” once Mr. Assad’s government was toppled.

Mr. Maleh said his group would move to Aleppo after what he called its liberation from Assad government control.