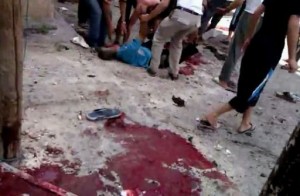 Fighting in Syria’s largest city of Aleppo stretched into its 11th day on Tuesday amid growing international condemnation of the Syrian government’s crackdown on a tenacious rebellion that has lasted 17 months.

Activists reported renewed bombardments of rebel-held neighborhoods and clashes in many parts of Aleppo as the army pushed on with its offensive to retake this key northern city. The battle for Aleppo, Syria’s commercial hub with around 3 million inhabitants, has now lasted longer than the rebel assault on the capital Damascus that regime troops crushed earlier in July.

Even as the fighting raged inside the city, rebel forces reported a number of victories in the surrounding countryside, including the town of al-Bab and a key army checkpoint at Anand. The capture of the checkpoint will ease the movement of fighters and supplies between Aleppo and the Turkish border, 30 miles (50 kilometers) away.

The Britain-based Syrian Observatory for Human Rights said the rebel bastion of Sakhour in the northeast of Aleppo was being shelled and that clashes had broken out between rebels and government forces elsewhere in the city, especially in Salaheddine in the southwest.

Syrian forces have attacked rebel positions with artillery and mortars as well as helicopter gunships.

The Syrian government has defended its assault on Aleppo to the U.N., describing a city in the grip of “terrorist mercenaries” funded by Qatar, Saudi Arabia and Turkey, that are holding people hostage as human shields and committing “horrifying crimes.”

But U.N. Secretary General Ban Ki-Moon has expressed deep concern over the use of heavy weapons by the government in suppressing the rebellion, especially around Aleppo, calling on both sides to adhere to a ceasefire and the international organization’s widely ignored peace plan.

On Sunday, the U.N. observer mission in Syria tasked with monitoring the never-observed ceasefire was shot at, according to Ban, who said a five vehicle convoy of Lt. Gen. Babacar Gaye was struck by small arms fire near the central city of Homs.

More than 2 million people have been affected by the fighting in a country of 22 million, said Ban, adding that “more fighting is not the answer.”

In Aleppo alone, the U.N. has estimated that 200,000 people have fled the fighting, either taking shelter in nearby villages or making the trek to the refugee camps across the border in Turkey.

Refugees from Aleppo have described a city devastated by shelling and wracked by food shortages.

Photo: An image taken from a video uploaded on YouTube shows Syrians lifting the body of a man who was allegedly killed during the bombardment of Aleppo. Almost half of those killed in Syria since the outbreak of the anti-regime revolt in March 2011 have died since a failed UN-Arab League truce was due to come into force, a monitoring group said. AFP/YouTube