Fears grow over fate of Syrian city of Aleppo 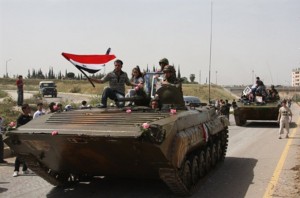 International concern was mounting Friday over a looming massacre as Syrian troops bombarded the besieged city of Aleppo with artillery, strafed it with aircraft and pulled in major reinforcements ready to crush the outgunned rebels.

The battle is one of the most important of the 17-month-old uprising. With a population of about 3 million, Aleppo is Syria’s largest city and commercial hub, a key pillar of support for President Bashar Assad’s regime.

The rebels controlled several neighborhoods but were facing reports of troops and tanks massing outside the city. The nonstop fighting in Aleppo has already claimed the lives of at least 145 rebels and civilians in the last six days, according to the Britain-based Syrian Observatory for Human Rights.

U.N. High Commissioner for Human Rights Navi Pillay expressed “deep alarm,” saying in a statement that the “reported build-up of forces in and around Aleppo, bodes ill for the people of that city … it goes without saying, that the increasing use of heavy weapons, tanks, attack helicopters and — reportedly — even jet fighters in urban areas has already caused many civilian casualties.”

In at least two formerly rebel-held Syrian towns over the summer, al-Qubeir and Houla, hundreds of civilians were killed after pro-regime militias moved in, according to activists.

It has been a difficult two weeks for the Syrian government with rebel assaults first on the capital, Damascus, and then on Aleppo, as well as several high-profile defections and a bomb that killed four top security officials.

The government, however, struck back and quashed the assault on the capital with a combination of heavy weapons and house-to-house searches. Scores of people were killed. Similar tactics were expected in the coming days to keep Aleppo from falling into rebel hands.

“I think there will be a huge massacre in Aleppo,” said Michel Kilo, a veteran opposition figure living in exile in Paris. “There will be a terrible revenge against civil society.” He said all of Aleppo, once believed to be a regime stronghold, was revolting against Assad’s regime.

His concerns were echoed by British Foreign Secretary William Hague and U.N. Secretary General Ban Ki-Moon, both of whom called on Assad to immediately halt the attack on Aleppo.

“I am deeply concerned by reports that the Syrian government is amassing its troops and tanks around Aleppo, and has already begun a vicious assault on the city and its civilians,” Hague said, speaking at the opening of the Olympics in London. “This dire situation illustrates very strongly why the people of Syria needed the U.N. Security Council resolution we proposed last week.”

Speaking at the same event, Ban added that “the violence from both sides must stop for the sake of the suffering civilians of Syria.”

Western nations in the Security Council have been trying to pass a strong resolution condemning Syria and imposing harsher international sanctions. Russia and China have blocked them, citing concerns that they could pave the way for foreign military intervention — as was the case in Libya.

The threat of Libyan forces retaking the rebel stronghold of Benghazi in March 2011 resulted in a U.N.-mandated no-fly zone that opened the way for a vigorous NATO bombing campaign. Russia maintains that NATO overstepped its bounds and does not want that to happen in Syria too.

As a result, there is little the international community can do to help the rebels surrounded in Aleppo — or in other Syrian cities like Hama, Homs, Deir al-Zour and Daraa, where there are daily reports of bombardments and casualties. Activists estimate more than 150 people are killed every day nationwide. July is set to become the bloodiest month of an uprising that activists say has claimed 19,000 lives since it began on March 2011.

Gulf countries like Saudi Arabia and Qatar are believed to be funding the rebels through Turkey and there have been indications that the ragtag Free Syrian army is using better weapons and tactics, as seen by their tenacious hold on neighborhoods in Aleppo and other cities.

The former head of the U.N. observer mission said Friday that he expected the Assad regime to fall eventually, but that the aftermath could witness even more bloodshed.

“It’s impossible to imagine a future in Syria where the current people in power remain in power. So in that view, it’s just a matter of time before this regime collapses,” Maj. Gen. Robert Mood told a news conference in Oslo, Norway.

Mood, who left Damascus on July 19, warned that the regime still has a great deal of military muscle. The core of the army, which has vast reservoirs of weaponry, has remained loyal to Assad.

But the regime has been embarrassed by several high-ranking defections including three diplomats. On Friday, Ikhlas Bawadi became the first member of Syria’s new parliament elected in May to defect.

“The violence being perpetrated by Bashar Assad’s regime against innocent people who are seeking freedom is unacceptable,” she told the Turkish Anadolu agency. “I could no longer tolerate the oppression, that’s why I left. I will keep working to free all my friends from the oppression.”

In Damascus, meanwhile, the International Committee of the Red Cross said it was temporarily moving some of its foreign staff to neighboring Lebanon. A Red Cross spokesman in Geneva, Hicham Hassan, said the move was prompted by security concerns but that a core team of about 50 staff would remain.

Hassan also told The Associated Press that the Syrian Arab Red Crescent was suspending some of its operations in the capital because of “the deteriorating security situation.”

“This in no way means we are suspending our activities, especially at a time when needs are growing. … They will go back to Damascus at the appropriate time.”

Poland, meanwhile, announced that it had closed its embassy and evacuated its diplomats from Damascus. The Polish embassy had been representing U.S. interests in the Syria since the U.S. closed its own in February.