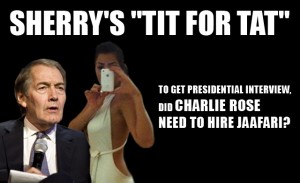 While Sherry Jaafari was unapologetic about working for Bashar al-Assad, she was at the same time looking for a way out of the presidential palace in Damascus. The 22-year-old wanted to return to the United States and live like a normal girl. What she did while serving as a media adviser to Assad was what “any ambitious American girl would do,” she told the Daily Telegraph last month.

Previously leaked emails showed how well-known American journalist Barbara Waters has helped Jaafari, the daughter of Syria’s envoy to the United Nations to enroll at the prestigious graduate program at Columbia University’s School of International and Public Affairs. This came after Jaafari helped Walters secure an interview with Assad in December 2011.

New leaked emails obtained by Al Arabia English show how Jaafari almost single-handedly arranged for the interview, how she had to deal with the angry backlash from Damascus after the interview was aired, and how despite that she remained in touch with Walters.

Walters request for the interview with Assad came in September 2011. In her letter asking for the interview, Walters recalled her visit to Damascus in 2008. “We had a frank and open conversations as you shared your insight and your hope for peace in the Middle East,” she wrote in her letter to him.

“I am sure there are many misconceptions about you and Syria that you might like to address,” Walters said in the letter. “In a period of protests and international sanctions, it is vitally important to hear your view of the situation and your vision of the future of your country.”

Walters was granted an interview with Assad that was aired in December. Other Western media organizations chased Jaafari for interviews with Assad after ABC News announced theirs, but no other interviews were granted. BBC Newsnight and Charlie Rose both tried, but they were told Assad was not doing any more interviews.

“Any word on our interview with the president,” Rose asked Jaafari in an email dated on Jan. 19, 2012. “Can you give me an update.” Few hours later, Jaafari replied: “I don’t think he is willing to make an interview now.”

At the same time that Rose was seeking Sherry’s help to get an interview with Assad, she was seeking his help to find work in the U.S. “I love u and I would love to be ur assistant,” Jaafari wrote to Rose, whom she describes in anther email as her “favorite Anchor!”, on Jan. 23, 2012. In his reply, Rose said he appreciates Sherry’s enthusiasm for him and his work, but he has doesn’t have time to meet. “Would you prefer I arrange an interview with others on my staff who have a lighter schedule?” he asked in his email.

Shortly afterwards, Jaafari returned to the U.S. seeking some peace of mind after the rocky weeks she spent working at the presidential palace in Damascus. On March 6, 2012, Syrian Foreign Ministry spokesman Jihad Makdissi sent an email checking on Jaafari. “Hope all is well,” he wrote in the email sent from his iPhone 4S. “I just wanted to say hi and make sure [you are] Ok.”

In her reply, Jaafari said she is doing fine, “fighting the ignorant daily as usual.” At the end of her email, where she tells Makdissi that she is waiting for acceptance letter from Columbia, she asks him to “Say hi to the big boss,” meaning Bashar al-Assad.

However, that was not what she always called Assad.

“Dude,” where is my country?

Few days after she sent that to Makdissi, The Guardian published a series of leaked emails where Jaafari was referring to Assad as “the dude.” ABC News Middle East correspondent Alexander Marquardt sent an email to Jaafari on March 15, 2012 asking her if the emails were authentic. “are these real?” he asked her. “They are remarkable letters. You called him ‘the dude’?? Haha.”

Jaafari denied it, saying “the “dude” explains how it’s so not real.”

However, the newly leaked emails obtained by Al Arabiya English show that Sherry repeatedly referred to Syrian president Bashar al-Assad as “the dude.”

Jaafari wrote an email to her boyfriend on Jan. 28, 2012 telling him about her work in the palace: “it’s a lot of pressure…and u know how sensitive I am and how much i love the dude… so i have so many mixed feelings….”

But as we previously revealed in this series, Jaafari’s work was causing tension in her relationship. In one heated discussion with the boyfriend, she wrote on Feb.5, 2012: “do whatever you want.. criticize the dude,, criticize my dad.. say that they are a bunch of criminals and let your friends laugh at it.”

Later in that email she said: “Fu*k the dude … he is not the country.. the country is destroyed (sic) now.. and nobody can fix it..”