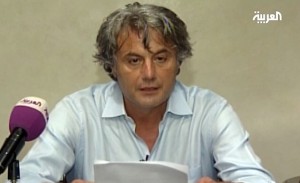 The Obama administration and officials of some Arab and Western nations are discussing ways to place Syria’s highest-ranking military defector at the center of a political transition in the Arab state, according to U.S. and Middle East officials.

The focus on Brig. Gen. Manaf Tlass, a childhood friend of President Bashar al-Assad, is increasing as hopes fade for prospects that an umbrella resistance group, the Syrian National Council, can galvanize the opposition, the officials said.

Efforts to find a transitional figure who is palatable to the Assad regime’s Russian backers and leading Arab states, as well as to the opposition, have taken on added urgency as rebel fighters make gains in major Syrian cities and more high-level officials defect, the officials said.

The officials said Gen. Tlass is one of the few figures in opposition to the regime who could potentially help restore order in Damascus and secure Syria’s vast chemical-weapons stockpile.

Gen. Tlass was a commander in Syria’s elite Republican Guard before his July 6 defection, and his father served as defense minister under Mr. Assad’s late father, Hafez al-Assad, for 30 years.

He is also, unlike the Assad clan, a Sunni Muslim—which Western officials hope could make him acceptable as a transitional figure to the country’s rebel fighters and opposition leaders, who are also largely from the Sunni sect of Islam.

“It’s too early to say if Tlass will stand the strain and pick up traction or just fade away,” a senior U.S. defense official said. “The next week or two will reveal his credentials and attractiveness to the various components internally and internationally.”

But the focus on Gen. Tlass also underscores the dearth of figures who can present a viable alternative to Mr. Assad. Many in the opposition consider Gen. Tlass and his family too closely tied to the Assads’ repression and corruption to be acceptable to Syrians. They also question his ability to win over members of Mr. Assad’s Alawite sect, which makes up 12% of Syria’s population and appears largely unified behind the regime.

“Someone like Tlass is difficult to sell to the Syrian people,” said Ammar Abdulhamid, an anti-Assad activist based in Washington. “He certainly can’t play any leading role in a transition.”

More about President Bashar al-Assad’s family and the tight circle of clan members ruling the country.

The relative lack of Western options became clear this week, when the European Union’s foreign ministers shifted from its longtime support of the Syrian National Council, a largely émigré group that Brussels had made an official interlocutor in early 2012. On Monday, EU foreign ministers dropped all reference to the group in its statement on Syria.

A turning point came at the Paris meeting of the Friends of Syria on July 6, a senior European diplomat said, when the SNC seemed to have no response to the EU’s calls for it to broaden its political base. They “just don’t seem to be making progress on this,” the diplomat said.

Gen. Tlass’s flight to Paris this month was cheered in Washington and Brussels as the clearest sign of cracks inside Damascus’s ruling elite. The majority of Syria’s officer corps hails from Mr. Assad’s Alawite sect, an offshoot of Shiite Islam. Gen. Tlass’s defection has been viewed as a potential rallying cry for the Syrian armed forces’ Sunni base to switch sides.

On Tuesday, Gen. Tlass went on television and pledged to facilitate change in his country and promote religious and racial harmony. He spoke from Saudi Arabia, looking slightly ill at ease in an open-neck shirt on the Saudi-owned Al-Arabiya network.

Arab officials said his appearance in Saudi Arabia showed how the ruling al-Saud family is seeking a role for the Syrian officer. Saudi Arabia is the leading Sunni state backing Syria’s rebels against Mr. Assad, along with Qatar and Turkey,

U.S. and European officials also hope that a role for Gen. Tlass in the opposition would help win Russian support for a transition in Damascus because of the Tlass family’s long ties to the Assad regime, whose Russian patronage dates to Cold War support of Hafez al-Assad.

Still, some Syrians who know Gen. Tlass and other members of his family dismiss the possibility that he could play a central role in any transition, especially given his family’s role in the Assad regime over four decades.

“They are in business and the army, so they are covered both ways,” said a family acquaintance. Gen. Tlass has a brother, Firas, who has for example won government contracts to import sugar and feed the military. Gen. Tlass couldn’t be reached for comment. Firas Tlass said he couldn’t comment on whether his brother was in discussions about a transition role.

Some who know Gen. Tlass question his leadership ability. One family acquaintance said that although Gen. Tlass objected to the use of force in putting down the uprising in places such as Homs and Hama, and favored dialogue, he was unable to stand up to regime hard-liners.