Analysis: The ‘day after’ in Syria

by yalibnan
1919
By David Ignatius It is time for Washington to emphasize what the United States can do, rather than what it can’t, in Syria. U.S. policy is caught between two imperatives
Share: 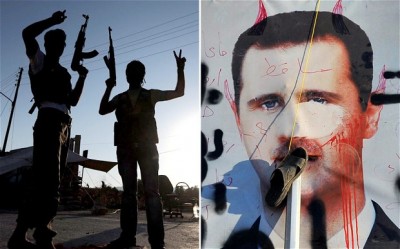 It is time for Washington to emphasize what the United States can do, rather than what it can’t, in Syria. U.S. policy is caught between two imperatives: President Bashar al-Assad must go, and the killing must stop. But while Assad’s government will probably fall, it is also a near-certainty that the killing will continue — with the United States and its allies trying to limit the collateral damage. The Obama administration should try to prevent the humanitarian crisis from spreading to other countries, even as it helps plan the reconstruction of Syria.

For starters, the United States can assist Turkey and Jordan with food and relief supplies for the tens of thousands of refugees fleeing Syria; it can bolster the neighbors, especially Lebanon and Iraq, to contain the sectarian fighting. It can help the Syrian opposition frame realistic plans for political transition that reassure the country’s minorities they won’t be slaughtered.

I’d even like to see a joint Russian-American humanitarian effort in central Syria, using the Russian naval vessels that are docked in the port of Tartus as the hub. The Russians keep saying that their real goal is to prevent chaos in Syria, like what happened in Iraq after the fall of Saddam Hussein and in Libya after the toppling of Moammar Gaddafi. Okay, if Moscow feels so strongly about protecting the Syrian people, here’s a way to do something about it.

An advertisement of the limits of U.S. power was the tirade last week by U.N. Ambassador Susan E. Rice, who called the Russians “pitiful,” “dangerous” and “deplorable” after they refused to back a strong Security Council sanctions resolution on Syria. In this fulmination, she was emulating her boss, Secretary of State Hillary Clinton, who has described Russian actions as “despicable” and “intolerable.” This diplomacy-by-insult toward a country we are nominally seeking as a partner is counterproductive. Enough, already.

The reality, whether the Russians like it or not, is that the Syrian opposition is stumbling its way toward the gates of Damascus. Major Syrian figures are defecting, and more are said to be on the way. Meanwhile, the United States and its allies are divvying up the pieces of an increasingly potent covert action program — with the Saudis and Qataris providing money and weapons, America providing communications and logistics (a.k.a. command and control) and the Turks, Jordanians, Israelis and Emiratis providing intelligence support on the ground.

Even as the opposition pushes Assad toward the door, officials should worry about what comes next. U.S. officials reckon that well over 100 al-Qaeda in Iraq fighters are active in Syria, and that the numbers are growing as the fighting intensifies. A jihadist state that provides a new foothold for al-Qaeda would be a disaster for the region. Preventing this outcome should unite every player — including Russia, the United States, Israel, Turkey, Jordan, Lebanon, Iraq and Iran.

Some Americans still talk about a major U.S.-led military intervention, but this option is receding in the face of reality: Syria has an air defense system tighter than Pakistan’s, and a chemical-weapons arsenal that can be quickly dispersed to scores of locations. Getting military forces into Syria would be hard, but getting them out would be even harder. Fortunately, the opposition doesn’t seem to want NATO to fight its war.

As one U.S. official stresses, the intervention proposals don’t meet the first requirement of what he describes as “Strategy 101” — namely, that in uncertain situations, the potential benefits of intervention should far outweigh the potential costs.

A positive sign is that serious planning for a post-Assad Syria has already begun. With U.S. help, the Syrian opposition in early July endorsed a “national compact” of outreach to Syria’s minorities and a transition plan for “restructuring” the Syrian military and government. Meanwhile, the U.S. Institute of Peace has been sponsoring similar discussions, according to Josh Rogin of Foreign Policy.

But these “day-after” efforts are just a start: The scary thing about Syria is that, in the first weeks after Assad is toppled, violence is actually likely to increase. The United States may not have broken Syria, as it did Iraq, but it’s going to have to help fix it, anyway.

The best thing that can be said about this administration’s foreign policy is that it’s patient. Officials seem confident that a process is in place that will eventually lead to Assad’s fall. The situation reminds me of last summer in Libya, when critics were demanding escalation to prevent a stalemate. The administration was right to keep its cool then, and now.