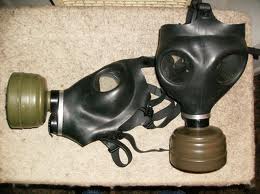 The Syrian government is still in full control of its chemical weapons stockpiles, Israeli defense officials said on Tuesday, in an apparent bid to calm fears that a non-conventional war could be looming.

Syria’s 16-month-old conflict has spread concern that the chemical arsenal, acknowledged by Damascus for the first time on Monday, could fall into the hands of Hezbollah, the Lebanese Islamist group allied to Iran and Syrian President Bashar al-Assad, or that Assad could use then in a desperate last stand.

The Assad government said such weapons are secure and could be used only as a last resort against Syria’s foreign enemies – an allusion to outside military intervention.

The rhetoric stoked demand in Israel for state-funded gas masks, which have been distributed over the last few years as part of the country’s wider preparations for a possible showdown over arch-foe Iran’s disputed nuclear program.

“The worry, of course, is that the (Assad) regime will destabilize and the control will also destabilize,” Amos Gilad, adviser to Defense Minister Ehud Barak, told Israel Radio.

But he added: “At the moment, the entire non-conventional weapons system is under the full control of the regime.”

Israeli armed forces chief Lieutenant-General Benny Gantz concurred that Assad had control of the stockpiles and was also stepping up security over them.

“To the best of my knowledge, they have not yet reached negative hands,” he told a parliamentary panel on security.

“This does not mean it will not happen,” Gantz said. “They could used them against civilians or transfer specific components of the weapons to Hezbollah.”

Taking a different tone during a visit to Brussels, Israeli Foreign Minister Avigdor Lieberman said any indication that Syrian chemical or biological weapons were about to reach Hezbollah would be a “red line” and a “clear casus belli”.

“We will act decisively and without hesitation or restraint. We hope for understanding from the international community,” he told reporters.

Israel is technically at war with Syria and occupies the Golan Heights. While they have not traded blows in three decades, the Assad government’s disclosure suggested there would be no holds barred if its survival were to be threatened by foreign forces.

Underpinning Israel’s concerns are holes in its homefront defenses exposed during the 2006 Lebanon war by Hezbollah rockets. Those rockets are dwarfed by Syria’s Scud missiles.

Since being hit by Iraqi Scuds during the 1991 Gulf war, Israel has required new homes be built with dual-use fortified rooms that can be sealed off as bomb shelters. But around a fifth of citizens still lack these or a public shelter in reach.

Gas masks are another precaution. Some critics say the kits, costing the state $60 to $175 are a pricey item with limited value against nerve agents.

But Israelis are taking up the offer, just in case.

“There’s a smell of chemical weapons in the air, the sense that a war could be triggered,” said Maya Knobler, 65, who collected masks for herself and her daughter in a shopping mall in Mevasseret Zion, a town outside Jerusalem.

The Israel Postal Company, which distributes them for the military, said 3,700 gas masks were handed out on Monday, up from the daily average of 2,200.

“The increase was without a doubt connected to Syria,” said company spokesman Merav Lapidot.

She said there had been swings in demand in the past and she knew of no orders to boost supply now. Of Israel’s 7.8 million citizens, 4.2 million had been kitted out, Lapidot said, and the rest would be reached within six months.

Among detractors of the drive was Amos Yadlin, former commander of Israel’s military intelligence.

“I think that the panic which is being instilled in the public concerning Syrian chemical weapons is superfluous and it would be best to turn down the volume,” said Yadlin, who runs Tel Aviv University’s Institute for National Security Studies.

“Against the non-conventional threat it would be better to best to play up Israel’s deterrent factor,” he told Army radio, in an apparent reference to superior Israeli weaponry including missile shields and what is thought to be the region’s only atomic arsenal.