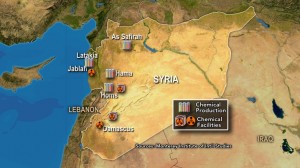 Beirut, Llebanon – The Syrian government has moved chemical weapons to airports on its borders, the rebel Free Syrian Army said on Tuesday, a day after the regime warned it could use them if attacked by an outside force.

“We in the joint command of the Free Syrian Army inside the country know very well the locations and positions of these weapons,” a statement from the FSA said.

“We also reveal that [President Bashar] Assad has transferred some of these weapons and equipment for mixing chemical components to airports on the border.”

The statement said the weapons had been moved in a bid to pressure the international community, much of which has called for Assad to step aside in the face of a 16-month uprising against his rule.

“According to our information, the regime began moving its stocks of weapons of mass destruction several months ago… with the goal of putting pressure on the region and the international community,” the FSA said.

But the group said it was impossible to believe that the regime would use its weapons against neighbouring Israel, which has publicly expressed concerns about the fate of Syria’s massive chemical weapons stocks.

“The regime that has not fired a single bullet against Israel during the course of three decades is certainly not going to use chemical weapons against that country,” the statement said.

The Syrian regime made public reference to its chemical weapons stocks for the first time on Monday, with foreign ministry spokesperson Jihad Makdissi warning they could be used if outside forces attacked.

“Syria will not use any chemical or other unconventional weapons against its civilians, and will only use them in case of external aggression,” Makdissi told reporters.

“Any stocks of chemical weapons that may exist, will never, ever be used against the Syrian people,” he said, adding that in the event of foreign attack, “the generals will be deciding when and how we use them”.

The comments sparked international condemnation, including from the United States, with US President Barack Obama warning Syria not to make the “tragic mistake” of using such weapons.

Makdissi backtracked somewhat later, stressing in an e-mail that Syria would “never use chemical and biological weapons during the crisis… and that such weapons, if they exist, it is natural for them to be stored and secured”.