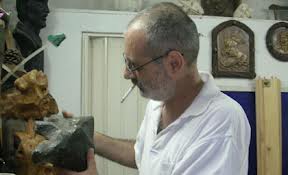 RENOWNED Syrian sculptor Wael Qastun has been tortured to death in the flashpoint central of city of Homs, an artists’ association has said.

A statement released by the Syrian Coalition of Artists for Freedom said Qastun “died under torture”.

“He was transferred to the Homs military hospital, and his family was informed of his martyrdom.”

Qastun was a father of two, and his sculpture focused mainly on women.

Several other artists have suffered violence at the hands of government forces since an uprising against the rule of President Bashar al-Assad erupted in March 2011.

Ibrahim Qashush, a protest songwriter from the central city of Hama, was killed in July last year, and activists reported he had his voicebox removed.

Earlier this month, Human Rights Watch charged that Syria was holding tens of thousands of detainees in a “torture archipelago” in which they were subjected to beatings, electric shocks and other abuse.

The New York-based rights group documented 27 detention facilities across the country it said were used to hold people swept up in the government’s deadly crackdown on a 16-month uprising.

The Syrian Observatory for Human Rights says tens of thousands of people have been detained and more than 19,000 killed.