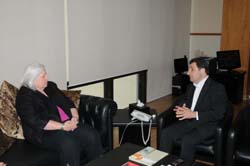 Beirut, Lebanon – The U.S. ambassador to Lebanon Maura Connelly stressed Tuesday the commitment of her country in providing assistance to Syrian refugees who are “fleeing violence” in their homeland.

The ambassador’s comments came after her meeting with Lebanese Minister of Social Affairs Wael Abou Faour, during which they discussed political and security situation in Lebanon and developments in Syria.

In a statement after the meeting, Connelly praised the ” generosity of the Lebanese people and the efforts of the government in conjunction with international partners and organizations to provide humanitarian assistance to Syrians fleeing violence.”

“Connelly reaffirmed the United States’ continued commitment to providing assistance to Syrian refugees and the Lebanese communities that are hosting them,” the statement said.

The U.S. envoy further stressed the importance of protecting all refugees in Lebanon, including dissenters and deserters who have rejected violence.

“The ambassador renewed the commitment of the United States to a stable, sovereign and independent Lebanon,” the statement concluded.