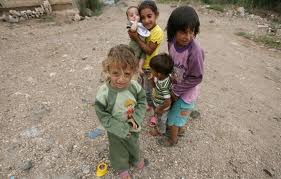 Masnaa- Lebanon launched an international appeal for aid for a quickly growing number of Syrian refugees Monday after a massive influx of Syrians into the country last week that activists say brings the total refugee population to around 90,000.

The number of refugees spiked last week after the killings of a number of high-ranking security officials in Damascus. The bombing and subsequent offensive launched by the Syrian opposition in Damascus jarred the nation and caused thousands of families to abandon the capital and the worsening violence.

The United Nations High Commissioner for Refugees said last week that up to 30,000 refugees arrived through Lebanon’s Masnaa border crossing in the east of the country over the span of two days.

The Local Coordinating Committee of Syria, which works in Lebanon to aid refugees and support the opposition, now estimates there are 90,000 refugees in the country. But it’s too early to tell exactly how many there are, where they are located and who needs help, LCC officials said.

“There is no reliable figure at the moment,” Tripoli-based LCC spokesman Ahmad Moussa said. “We really don’t know how much money and resources are needed for these people.”

But with the Lebanese Higher Relief Committee facing shortages of funding and UNHCR reaching only a portion of the refugee population, government officials and aid workers have decided it’s clear that the country needs more funding to help.

Social Affairs Minister Wael Abu Faour said Monday that Lebanon would launch a round of contacts with Arab and international parties to garner financial support to help Syrian refugees.

“Lebanon will launch contacts on both the Arab and international levels to request aid for the Lebanese government so that it can do its job as was the case with other Arab countries in terms of carrying out refugee operations,” Abu Faour told reporters at the Grand Serail in Beirut.

He said that several countries and international institutions have expressed their willingness to help Lebanon with the thousands of displaced Syrians. However, he stressed that a plan for spending was required.

“Any international party willing to help should know where the money is being spent and how, and there should be a transparent and clear monitoring system,” he added.

The funding would help the Higher Relief Committee with its aid for the refugees after the state-run organization announced earlier this month that it had halted many of its program due to a lack of funding.

UNHCR has been bracing for an exodus from Syria, and a month ago doubled its forecast for the number of refugees who could flee this year to 185,000. UNHCR has had a long-standing call for aid for refugees that has mostly been answered by Western countries such as the U.S. and the U.K.

Gulf countries have been major aid contributors but often through local charities working in the country independent of the U.N.

While refugees have continued to flow into Lebanon, last week’s major influx has started to slow, and general traffic along the Beirut-Damascus highway has thinned considerably.

The Masnaa border crossing no longer resembles the industrial hub it used to be. The crossing looks more like a military headquarters, surrounded by barbed wire and several layers of military checkpoints.

General traffic along the highway had gone down around 70 percent, security sources said Monday due to limited traffic coming from Turkey, Jordan and Gulf countries into Lebanon. Most travelers, many with Damascus license plates, were seen cuing behind the line to get into Lebanon with few exiting the country. – With additional reporting by Rakan al-Fakih.