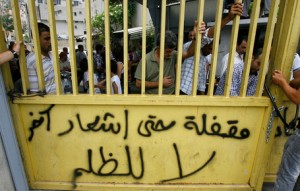 NNA also reported that the part-time employees prevented the vehicles from entering the EDL premises to protest against the delay in receiving their compensation.

EDL chief Kamal Hayek said in remarks published last Tuesday that EDL was on the verge of collapse if the sit-in by the part-time employees inside the company’s headquarters in the Beirut does not end.

EDL part-time employees have been at odds with the company over improvements to their work conditions and have called for changing their status to full time salaried employees.