Abducted Lebanese to stay in custody until Assad leaves 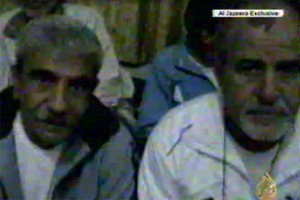 A Syrian rebel commander told Reuters on Sunday that 11 kidnapped Lebanese Shi’ites are staying in air-conditioned rooms and are in good health but will not be released until President Bashar al-Assad leaves power and a new parliament is elected.

“Their health is good and they’re fine and they’re eating and drinking well, staying in a farm with full comfort and air conditioning, and they’re alive,” Abu Omar, commander of the Storm of the North brigade, told Reuters at the Bab al-Salam border crossing with Turkey, which his men had overrun on Sunday.

The Lebanese hostages were on a bus that was stopped by gunmen on May 22 as it crossed into northern Syria from Turkey on its way home from a pilgrimage to Iran. The gunmen released the women and kept the men.

“(They) are from Hezbollah, their fate will be decided by the new Syrian parliament, because Hezbollah attacked us and is helping the Syrian regime,” he said.

“We’ve interrogated these Lebanese and during this transparent and fair investigation we found they are senior members of Hezbollah. They were caught taking pictures and giving information to the Syrian regime and Hezbollah.”

Reuters was unable to verify the assertion.

Abu Omar said he was in charge of rebel forces in the northern Syrian Azaz region.

Hezbollah has remained a staunch supporter of Assad, who belongs to the Alawite sect, members of an offshoot of Shi’ite Islam who are in the minority in Syria.

The rebellion has been led mostly by Syria’s Sunni Muslim majority, who complain that Alawite elites and their Shi’ite allies dominate the country.

“We detained them and we asked (Hezbollah leader Hassan) Nasrallah to apologize to the Syrian people. Nasrallah did not apologize,” Abu Omar said.

“Nasrallah demanded that the Syrian people make peace with Bashar al-Assad or he would support the Syrian regime in its war against us.”