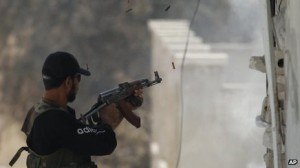 The BBC’s Paul Wood accompanied rebel fighters as they slipped into Syria from neighbouring Lebanon, to a rebel-held town close to the capital, Damascus.

A line of smugglers and fighters move up the side of a mountain in the dark.

It is steep – our legs are aching, our lungs screaming – and there’s three more days of this.

But it’s the only illicit route into Syria from Lebanon at the moment. The Syrian regime, fighting for its life, has managed to close all the others.

On the walk over the mountains was one man who joined the Free Syrian Army with only a sickle for a weapon.

Another had just turned 18, and after the assassinations in Damascus last week which killed senior government ministers, he was returning home from Jordan, where his parents had sent him for safety.

Weighed down with packs, they move as quietly as they can. There is a Syrian army post nearby and they do not want to wake it.

Finally we reach a town which is tenuously in rebel hands. But the town is ringed by Syrian artillery. It starts up at various times of the day, targeting the orchards where rebel fighters hide.

During a pause in the shelling, a couple of fighters drive me and our translator around town, describing some of their recent clashes with army forces.

The town is deserted now, with plenty of debris on the streets, burned out cars, big holes in the walls from mortars and shells. One or two people are walking about though, so it seems people are still here.

The assassinations in Damascus were a major blow to the regime, the men tell me, but it has retaliated by targeting civilians.

The men showing us around are with the Free Syrian Army (FSA). There is another, rival armed group here: the Salafis – hardline Islamists. They are the biggest group in this town, because they are getting guns and money from outside while the FSA is relatively poor.

There are even two rival media centres attached to each group. Abu Mohammed is with the Free Army’s.

“We want a civil state,” he says. “We have Christians here. What would happen to them under Sharia?”

The Salafis are calling for an Islamic emirate, he goes on. “But that is not the time for that. Now is the time to finish the regime.”

In the short term, in fact, both of the armed groups are fighting for the same thing – to overthrow the regime – and everyone here feels that is a step closer following the assassinations in Damascus last week.

Abu Ala is head of the revolutionary council in this town.

“The regime used to depend on the secret police – on terror,” he tells me. “But now that power is broken. Now it depends on the military but the military is growing weaker too. We are weeks away from the end, maybe days.”

Syrians in the uprising have been saying that for a long time.

As I write this, the town is under bombardment again.

People are determined; they have astonishingly high morale. But they have Kalashnikovs while the regime has the heavy weapons. That much has not changed since last week.