Fight for Aleppo has begun as death toll tops19000 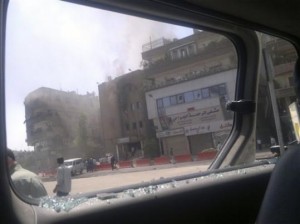 Beirut, Lebanon – Syrian rebels have launched an offensive to “liberate” the country’s largest city of Aleppo, an opposition commander said Sunday, while in Damascus government troops backed by helicopter gunships wrested back control of rebel-held neighborhoods.

The attack on Aleppo, Syria’s commercial hub and traditionally a bedrock of support for President Bashar Assad, was a sign of the rebels’ growing confidence and capabilities even as regime forces appeared close to regaining control of the capital Damascus after days of intense street battles there.

With Syria’s civil war moving from the countryside and smaller cities into the country’s two main urban centers, an activist group said the death toll had risen to more than 19,000 since the uprising began in March 2011. The Syrian Observatory for Human Rights also said July is shaping up to be the deadliest month of the conflict so far, with 2,752 people killed in the first three weeks.

The bloodshed has escalated as the rebels have taken the fight to the government with a week of fighting in Damascus, including a bombing that struck at Assad’s inner circle and killed four senior regime officials. In a bid to seize the momentum, the opposition also has taken control of four border crossings with Iraq and Turkey, most recently the Bab al-Salamah post on the Turkish frontier.

A video posted online by activists Sunday showed about a dozen gunmen standing in front of the Bab al-Salamah crossing as they raised the Syrian opposition flag.

Gen. Qassim al-Dulaimi, commander of Iraq’s forces around the border region of al-Qaim, reported the sounds of fighting at the Bukamal crossing, suggesting Assad’s troops are trying to retake that frontier post.

The fighting in Damascus and Aleppo has shaken the government’s once seemingly iron grip on the two cities, which are both home to elites who have benefited from close ties to Assad’s regime, as well as merchant classes and minority groups who worry their status will suffer if Assad falls.

Col. Abdul-Jabbar Mohammed Aqidi, the commander of rebel forces in Aleppo province, said “we gave the orders for the march into Aleppo with the aim of liberating it.”

“We urge the residents of Aleppo to stay in their homes until the city is liberated,” he said in a video posted by activists on YouTube. He added that rebels were fighting inside the city while others were moving in from the outskirts.

Aqidi called on government troops to defect and join the opposition, and said rebels will protect members of President Bashar Assad’s Alawite minority sect, an off-shoot of Shiite Islam, saying “our war is not with you but with the Assad family.”

The Britain-based Syrian Observatory for Human Rights and Aleppo-based activist Mohammed Saeed said the fighting is concentrated in several neighborhoods.

Saeed said rebels are in full control of the central Salaheddine district and the nearby Sakhour area. He added that thousands of residents have fled tense quarters of the city for safer neighborhoods and the suburbs.

“Aleppo is witnessing serious street battles” and many shops are closed, Saeed said.

He said there were fierce clashes on the road leading to the city’s international airport, known as Nairab, as rebels tried to surround the airfield to prevent the regime from sending reinforcements.

In the capital of Damascus, the Observatory also reported attacks by government forces in the neighborhoods of Mazzeh and Barzeh that had once been held by rebels. It said that troops used helicopters gunships in the attack, causing heavy casualties.

Maj. Gen. Nabil Zughaib, described as a missile expert, was also shot dead along with his wife and a son in the Damascus neighborhood of Bab Touma, according to the Observatory.

Syrian state TV denied government forces were using helicopters in Damascus, and said the capital was calm and special forces were just mopping up the remnants of the “terrorists” in cooperation with residents. The government refers to those trying to overthrow Assad’s regime as “terrorists.”

Television also showed images of calm streets in Damascus and workmen cleaning up rubble in the once-rebel held Midan neighborhood, in effort to portray a capital where everything has returned to normal.

Assad, meanwhile, appeared on state TV receiving Gen. Ali Ayyoub, the new army chief of staff, whose predecessor replaced the defense minister slain in the bombing. It was only Assad’s second appearance since the attack.

Despite the regime’s efforts to present an image of calm in the capital, Malaysia’s government said it was shuttering its embassy in Damascus and evacuating more than 130 students and diplomats, while Italy ordered of its citizens to leave the country because of the “progressive deterioration” of the situation.

The escalating bloodshed and increasing chaos in Syria also has put the country’s neighbors on edge, particularly Israel.

Prime Minister Benjamin Netanyahu said Sunday that Israel was closely monitoring the violence in Syria for signs the regime’s chemical weapons or missiles might make their way into the hands of anti-Israeli militants.

Over the weekend, Israel’s defense minister, Ehud Barak, said the Jewish state was preparing for a possible attack to prevent that from happening.

The increasingly precarious situation of the Assad regime is stoking Israeli fears that, should the Syrian government collapse, militants affiliated with Lebanon’s Hezbollah or al-Qaida could raid Syrian military arsenals for chemicals weapons or sophisticated missiles that could strike Israeli territory.

For his part, King Abdullah of Saudi Arabia has announced the start of a “national campaign to collect donations to support our brothers in Syria,” suggesting the oil-rich kingdom may be looking to boost its financial support for the rebels, which they are already believed to be funding.

Photo: This citizen journalist image shot through a broken car window shows smoke billowing from a building after fighting between rebels and Syrian troops in the Yarmouk camp for Palestinian refugees in south Damascus, Syria, Saturday, July 21, 2012. This week, fierce fighting between troops and rebels reached the Syrian capital, the central bastion of Bashar Assad’s rule, shattering parts of the city and sending thousands of people fleeing to neighboring Lebanon and Iraq. Activists and residents reported a tense calm in Damascus Saturday but said sporadic gunfire and explosions could be heard throughout the night. (AP Photo)