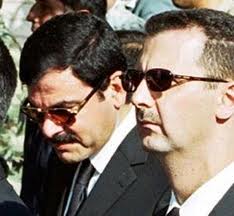 BASHAR AL-ASSAD has not been seen or heard in public since the bomb attack that killed four of his top security advisers, despite appearing a day later on TV appointing a new defence minister. The Syrian President’s state of mind and plans are not known. But his inner circle is shrinking – along with his options.

Diplomats reported yesterday Assad was still in Damascus, scotching rumours he had fled to organise a last stand in the coastal heartland of his Alawite sect. The death of Asef Shawkat, Assad’s brother-in-law and deputy defence minister, was the most damaging, according to observers struggling to make assessments out of scraps of information and a chorus of propaganda – a task some compare with the Kremlinology of the Cold War.

The elimination of the four generals leaves significant gaps in the uppermost ranks of Syria’s defence establishment. ”Bashar has suffered a great loss in Shawkat,” said a former government official. ”It’s a deadly blow.” The President’s younger brother, Maher, the commander of the 4th armoured division and an unreconstructed hardliner, is now his closest adviser. But veteran security chiefs Ali Mamluk and Hafez Makhlouf are influential too.

”These three are the hard core of the regime,” says Fabrice Balanche, a French expert on the Alawites.

Outsiders struggle to characterise the relationships within the secretive inner circle. ”The Assad regime itself is not so cohesive,” argues Nadim Shehadi of London’s Chatham House. ”What binds them together is negative tension. They will only trust someone because they know they have some kind of hold over them.”

Assad, say presidential observers, is now likely to be drawn closer to his family – his mother, Anisa, the clan’s powerful matriarch and widow of former president Hafez, and his sister Bushra, Shawkat’s widow. Both were seen at the funeral of Shawkat and two other bomb victims. Assad was not there but represented by the Vice-President, Farouk al-Sharaa.

Speculation is rife about what Assad will do next. One scenario has him holding on for now but fleeing in the end with immediate family. Whether the so-called ”Dacha option” is still viable depends on whether the Russians will help him if he is forced to step down.

”I think Bashar might fight to the end,” said the former government official. ”He seems to be more defiant and that makes it less likely he will be able to find an escape route. Earlier on in the crisis he could have gone to the UAE. But now I doubt whether any Arab country will take him in. He’s too toxic.”