600 British troops are on standby over Syria crisis 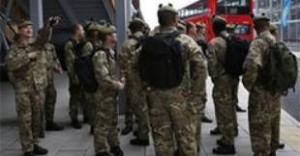 Defence chiefs have placed more than 600 British troops on standby as part of contingency plans to evacuate UK nationals from Lebanon, amid intelligence warnings that Syrian President Bashar al-Assad could fall within four weeks.

There are fears that thousands of Britons would become trapped in the region in the aftermath of the downfall of the Assad regime, with ethnic fighting spilling over into neighbouring Lebanon, where tens of thousands of refugees are seeking sanctuary.

Rebel leaders, whose fighters include men trained by former SAS soldiers, claimed yesterday that Assad will fall within 30 days.

This view was endorsed by the Russian ambassador to France, who suggested the Syrian leader had accepted he would leave power.

Alexandre Orlov said Assad had in effect agreed to step down last month at a conference in Geneva by nominating his representative to lead negotiations with the opposition for a democratic transition.

‘That means he accepted to leave, but in a civilised way,’ Mr Orlov added. Syria denied the claim yesterday as fierce fighting continued around Damascus.

Battles involving tanks, helicopters and mortars have turned parts of the city into combat zones and sent thousands of Syrian families streaming across the border into neighbouring Lebanon.

More than 300 people were reported to have died around the city on Thursday, while the UN’s refugee agency said between 8,500 and 30,000 people have fled into Lebanon over the past 48 hours.

Significantly, rebel fighters have seized control of several border posts on the southern frontier with Iraq and the northern border with Turkey.

The Daily Mail can reveal some rebels inside Damascus have been trained by former SAS soldiers working for teams of private security contractors from two companies based in the Middle East.

More than 300 rebels have passed through a remote base just inside Iraq, while a second ‘higher tier’ command course not involving weapons is being held in Saudi Arabia.

Potential leaders are given military planning tuition with training in military tactics including weapon handling, leadership and using communications systems.

Foreign Secretary William Hague yesterday condemned Russia’s decision to veto a UN resolution on Syria and warned the body could be sidelined in efforts to support the opposition movement.

He said other countries would step up the supply of arms after the Security Council failed to approve a resolution threatening sanctions against Assad’s regime.

He added: ‘I don’t rule out any option for the future because we can’t foresee how it will develop, but it’s never been our policy in any of the conflicts in the Middle East to send lethal assistance to any of the parties involved.’

The Foreign Office has been closely involved in contingency plans to evacuate UK passport holders from across the Middle East if the regime collapses and chaos spills over into Lebanon, Turkey and Jordan.

SAS soldiers and diplomats have been in Cyprus and the wider region, assessing the number of Britons who have already fled from Syria and drawing up plans for an evacuation if the violence spreads.

Syria’s new defence minister, Fahad Jassim al-Freij, was sworn in yesterday after his predecessor was killed in a suicide bombing in Damascus on Wednesday.