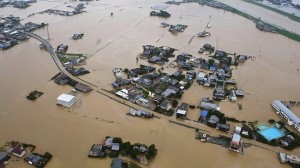 MORE than 5000 people have been cut off by landslides as more heavy rain and floods are forecast in southwestern Japan, where the death toll from torrential downpours has risen to 22.

Local authorities were separately dispatching rescue helicopters to take patients and elderly villagers to hospital from the isolated area, where at least one person was killed, officials said.

More than 5400 people have been shut away since late yesterday as landslides and fallen trees have cut roads and water supplies in the region, where unprecedented rainfall has fallen since Wednesday.

“We will continue sending emergency rations to people there as it is still unknown when we can secure access to the area,” said Kayo Shinohara, a spokeswoman for Yame City government.

“We are trying to do our best to remove rubble as soon as possible,” the spokeswoman told AFP by phone.

Rescue operations resumed early today in other affected areas in Kyushu, where at least eight people were still missing after 22 people were confirmed dead in the landslides or floods, officials said.

Some 3600 people remaining were ordered or advised to leave their homes in southwest Japan, NHK said, after local authorities lifted similar advice to some 400,000 others by this morning.

Rainfall up to 81.7cm has been recorded in Aso, which is at the foot of a volcano, where at least 18 people were killed and four others were still missing.

About 20 people were temporarily trapped in the city as muddy stream broke a river bank following rainfall of nine centimetres per hour, but they were later rescued safely, the reports added.