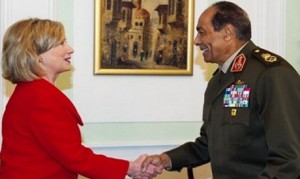 US Secretary of State Hillary Clinton was Sunday holding talks with Egypt’s top military leaders, just hours after calling for them to help smooth the country’s full transition to democracy.

The top US diplomat arrived in Egypt amid a complex power struggle being played out between the newly-elected Islamist president, Mohamed Morsi, and the Supreme Council of the Armed Forces (SCAF).

A day after her first meeting with Morsi, Clinton was to hold talks with Field Marshal Hussein Tantawi — the country’s interim military ruler after president Hosni Mubarak was ousted last year ending three decades in power.

Clinton has repeatedly called on the military to respect the outcome of the elections and told a news conference her talks with Tantawi would focus on “working to support the military’s return to a purely national security role.”

Morsi, Egypt’s first democratically elected president, is locked in a standoff with the military after he ordered parliament to reconvene, defying an army decision to disband the house.

But a declaration issued by the SCAF before Morsi was sworn in — which acts as a temporary constitution — granted the military sweeping powers, including legislative control, even though they handed over to Morsi on June 30.

While Morsi’s decree was applauded by supporters, it set off a firestorm of criticism from opponents who accused him of overstepping his authority.

Choosing her words carefully in the politically-charged atmosphere, Clinton said “it is very clear that Egyptians are in the midst of complex negotiations about the transition” including the make-up of parliament, a new constitution and the full powers of the president.”

“Democracy is hard,” she said. “It requires dialogue and compromise and real politics. We are encouraged and we want to be helpful. But we know that it is not for the United States to decide, it is for the Egyptian people to decide.”

Clinton’s meeting on Saturday with Morsi, a longtime member of the Muslim Brotherhood, comes after Egypt’s first free presidential elections following the ouster of decades-old US ally Mubarak, who enjoyed strong military backing.

The United States supported the full transition to civilian rule, Clinton said, adding however she wanted to commend the military council “for representing the Egyptian people in the revolution.”

“As compared to what we are seeing in Syria which is the military murdering their own people, the SCAF here protected the Egyptian nation,” and had overseen free elections, Clinton said.

“But there is more work ahead, and I think the issues around the parliament, the constitution have to be resolved between and among Egyptians.”

Hundreds of protesters had gathered outside the US embassy and later Clinton’s hotel to denounce what they said was “US interference in domestic affairs,” the official MENA news agency reported.

The US and Egyptian militaries have had a 30-year close alliance, and at the chaotic news conference one Egyptian reporter repeatedly tried to ask Clinton why the US had resumed its $1.3 billion in annual military aid.

A senior State Department official said Clinton would “encourage Tantawi… to engage in dialogue and to avoid the kind of confrontation that could potentially lead to the transition veering off track.”

Clinton will also focus on the protection of religious minorities and of women, and was meeting later Tuesday with women activists and Coptic leaders.

The post-revolution rise of the Islamists has raised fears among women and among the country’s 10-million-strong Christian community that their rights could be rolled back.

With the economy in a shambles due to a fall in tourism and a lack of growth, Clinton also Saturday outlined economic support “to help Egypt stabilise its economy and to use debt relief to foster innovation, growth and job creation.”

She unveiled plans for $250 million in loan guarantees to Egyptian small and medium-sized businesses, as well as setting up a US-Egypt enterprise fund with some $60 million in capital.