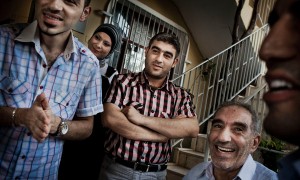 To escape the government he served until it gave him an order he could not obey, Capt. Akhmed Trad, a pilot in Syria’s air force, needed a plan: how to spirit himself over a border quickly, and leave no family behind.

In hurried meetings between the pilot and his parents, and indirect conversations over cellphones, evading what they worried were monitored calls, the Trad family set a time and place for everyone to meet, and fled.

Now safely in Turkey, where he is providing information to the rebels and helping them plan attacks, Captain Trad represents one of the great challenges to the government of President Bashar al-Assad and his military.

The Syrian government hails from the Alawite minority. But much of its administration and its military ability depend on Sunni bureaucrats, soldiers and officers like Captain Trad, whose alienation has been growing and whose defections risk increasing as Syria’s internal war takes on deepening sectarian tones.

Defected Sunni army officers have played a large role in the armed opposition since the war began last year, and they lead many of the field units of the Free Syrian Army, the umbrella antigovernment force. While the skills of defected air force pilots have less direct application for the rebels (who have no aircraft), the pilots’ decisions to join the uprising amount to both a moral and public relations victory for the rebels, and undermine the Assad military’s strength.

Captain Trad, interviewed with several family members in a village near this city by the Turkish-Syrian border, said he decided last year to defect, and he waited for his chance. When violence against Sunni citizens escalated this spring, he decided he could serve no more.

Captain Trad is a Mi-17 helicopter pilot; he said his aircraft was equipped to fire rockets. Pro-Assad forces were accused of ethnically motivated killings of Sunni Muslims in Houla, and as the primarily Sunni opposition forces were gaining strength, his commanders ordered his helicopter squadron to attack cities where the resistance was strong, including Idlib. This is where the Trads were born.

“We were told to bomb them, and for us, we did not accept it,” he said. “Bomb what? My town and my friends?”

Captain Trad said he had not yet fired a weapon in the war; he said he had shuttled troops and supplies, and had been assigned to protect Syrian V.I.P.’s.

Captain Trad traveled to Aleppo, deceiving his commander and the military along the way, and prepared to rush his family over the border. Once in Aleppo, he met one of his brothers, Mohammed, an L-39 training pilot who was posted to an air force academy there but had been convalescing from shrapnel wounds suffered when an officers’ bus was hit by a bomb in April.

Their extended family — 15 people in all, including 5 women and 4 children — were waiting, too, ready for a dash north to the border, a journey made in multiple cars with a scout traveling ahead, looking for checkpoints or patrols and relaying information by cellphone. “It was like an operation,” said Thaer Trad, another of his brothers.

Short of the border, they left the cars and met a guide from a smuggling network. He showed them the route on the border area’s many foot trails, repeating the path of thousands of other Sunnis who have fled.

Just before crossing, Akhmed Trad said, his commander, who had been calling Mohammed Trad’s cellphone all day in search of Akhmed, called again, demanding to know why Akhmed had not reported to duty in Damascus. The two officers switched off their phones, crossed the border and became refugees.

Akhmed Trad was not a ground-combat officer. He joined the Free Syrian Army in a support role. These days, he said, he works in a refugee camp in Turkey, helping fellow Syrians with humanitarian aid. He said he also spends time sharing intelligence with ground fighters. “I give information about the air bases and where the helicopters are,” he said. His insider’s portrait of Syria’s helicopter squadrons offers details of a military capacity that, while potent, is undermined by sectarian division and operational limits.

For the pilots, squadron life could be riven by unequal standards and simmering distrust. Though Alawites are a minority, they make up roughly two-thirds of the pilots, another pilot who defected said. Captain Trad said Alawite officers had higher social standing, greater professional latitude and more privileges than their Sunni colleagues: a climate that fueled resentment.

“If a Sunni officer is even five minutes late, there will be a response,” he said. “But let an Alawite officer be late for a day. Nothing will happen to him.”

The Alawite commanders’ suspicions were so great that Sunni pilots, when they are not flying, are largely confined to bases, he said. They are rarely allowed to leave their duty stations to visit their families, or meet together outside the base walls, out of fear that they will defect or rise up.

In one five-month period, he said, he was allowed to leave his base only 10 times when off duty; Alawite pilots could go home between each mission.

Helicopters in his squadron flew with three-man crews, he said, but their commanders made certain no crews were all Sunni.

Since he and his brother fled, Akhmed Trad said, a group of like-minded Sunni helicopter pilots in his squadron have also deserted and crossed lines. “Of my friends, there were eight,” he said. “All of them defected.”

Qassem Saaddedine, a former Syrian Air Force colonel and a MIG-23BN airplane pilot who defected seven months ago and is now head of the opposition’s military council in Rastan, Syria, said Friday that about 15 pilots had defected to date. He said he expected more.

“Morale is becoming weaker and weaker among the pilots,” he said. “This regime is not using Sunni pilots. They fear after their defection they might hit the presidential palace” with ordnance.

These numbers cannot be independently confirmed. In Captain Trad’s case, he showed The New York Times his Syrian officer’s identification card and accurately answered an extensive set of questions about Mi-17 munitions. He also gave thorough descriptions of tactics, demonstrating a degree of knowledge consistent with an aviation career.

The aircraft are also well armed. He said his squadron was regularly equipped with S-5 rocket pods and trained to drop OFAB unguided bombs and RBK cluster-munitions canisters. By the time he defected in June, he said, pilots were routinely firing S-5 rockets and sometimes dropping OFABs, but he was not aware of any cluster-munitions use yet.

There were reports last week of cluster munitions being used by Syrian helicopters; the reports, while gaining credibility, have not been independently verified.

For all of the technical capacity, the air force suffers from shortfalls in skills and equipment, as well as the sectarian tension. Pilot-training hours are less than in the West — Captain Trad said he had 300 flight hours in a career nearly a decade long, far less than that of a Western pilot of similar service time.

And the Mi-8 and Mi-17 pilots do not have night-vision goggles or significant experience flying by darkness, limiting their influence in battle and allowing opposition forces greater leeway at night.

Photo: Capt. Akhmed Trad, center, a helicopter pilot, defected from the Syrian Air Force, fleeing with his family to Turkey.