Fiercest fighting yet reported inside Damascus 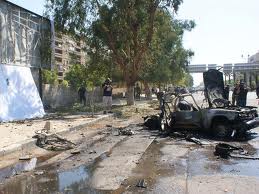 Opposition fighters battled Syrian government forces in Damascus on Sunday in what residents described as the fiercest fighting yet inside the city limits of the capital.

“I can’t believe it, it sounds incredibly close. I hear shooting and other stuff, like blasts. I can hear the sounds of ambulances rushing past. I am so afraid. People may die tonight,” said a resident in a district close to the fighting, contacted by telephone.

Activist Samir al-Shami, who spoke to Reuters by Skype from Damascus, said the fighting was under way in the al-Tadamon district in the capital’s south, after a night of sustained battles in the nearby Hajar al-Aswad district.

“There is the sound of heavy gunfire. And there is smoke rising from the area. There are already some wounded and residents are trying to flee the area,” he said, using Skype to show live video images of smoke visible over the skyline.

“There are also armored vehicles heading towards the southern part of the neighborhood,” he said.

Like others contacted by Reuters, he described it as the most intense fighting he had heard in the capital.

“This area has had a lot of fighting … The area is kind of a slum. The people who live there are poor. There’s a lot of people and a lot of grassy areas around it so it’s easy for rebels to sneak in and out,” he said.

An explosion hit a security forces bus in Damascus on Sunday and wounded several people, activists said. Residents said they heard a powerful blast, followed by the sirens of ambulances rushing toward Damascus’s southern ring road near the neighborhood of Midan.

Fighting reached the outskirts of the capital in recent weeks, focusing on poorer areas where anger against the authorities is highest.

The past week saw mortars fired inside the capital for what appeared to be the first time. Clashes have taken place at night with increasing frequency, while intensive battles during the day appear to be a new sign of the seriousness of the conflict.

The opposition Syrian Observatory for Human Rights, which compiles reports by anti-Assad activists, said Sunday’s death toll across the country was at least 80. Rockets were being used in the fighting in Damascus, it said.

“The sounds of explosions and heavy gunfire are still heard in the Tadamon neighborhood, the Saidi Qadad area and al-Qazaz in Damascus,” it said, referring to neighborhoods in the south of the city.

“There are violent clashes between regime forces and fighters from rebel battalions in these areas. Ambulances were seen transporting members of regime forces out. These clashes are the most violent to happen inside the capital Damascus.”

The government restricts access to the country by independent media.

Western countries, Arab neighbors and Turkey have formed an alliance against Assad. But diplomacy has had little impact so far, with Assad’s allies Russia and China blocking action by the U.N. Security Council and the West showing no appetite for the kind of intervention it undertook last year when NATO helped topple Libya’s Muammar Gaddafi.

Opposition reports of a massacre last week in the village of Tremseh brought a wave of new denunciations of Assad in the West. U.N. observers returned on Sunday to the village to gather more evidence at the site after finding blood, damaged houses and signs that artillery was used, but inconclusive evidence of the scale of the killing.

The government says it killed several dozen enemy fighters in battle in Tremseh last week but denies accusations that it carried out a massacre or that its forces used heavy weapons.

Opposition footage of the incident on the Internet has shown bloody corpses of men, but not women or children, making it difficult to determine whether those killed were fighters.

“What happened was not a massacre … what happened was a military operation,” Makdissi told a news conference in Damascus. “Government forces did not use planes, or helicopters, or tanks or artillery.”

Annan had said on Friday he was “shocked and appalled” at the government for breaking a promise not to use heavy weapons in populated areas, and that it was confirmed that helicopters and artillery had fired in Tremseh.

Sander van Hoorn, a Dutch journalist who reached Tremseh, said by Twitter that he had counted 30 graves in the town and had seen clear evidence of shelling, including of a school used as a shelter by refugees.

He said the evidence on the ground clearly contradicted the government’s assertion that no heavy weapons were used. But he also said had not yet seen signs of a massacre like one that took place in the city of Houla in May, when the United Nations says 34 women and 49 children were among 108 people killed.

“Impossible now to say how many civilians got killed in ‪#Tremseh‬ but at first sight (!!) it does not appear to be another Houla,” he tweeted.

Annan is due to fly to Moscow on Monday for a two-day visit in which he will meet President Vladimir Putin.

Western countries have repeatedly suggested they see Putin easing his support for Assad, but Moscow has shown no public sign of wavering in its backing for its last major Arab ally, a customer for its arms and host to a Russian naval support base.

Russia and China say they support a peace plan by Annan, which calls for a ceasefire and a negotiated transition to democracy but makes no explicit call for Assad to leave power. Assad’s opponents say negotiations are impossible unless he is removed.

Iran, Assad’s closest ally in the region, repeated a long-standing offer to act as a mediator between the government and opposition, but was immediately rebuffed by opposition activists.

The United States and its Western allies say Iran cannot play a constructive role, while Annan wants Iran at the table.

The Syrian conflict has taken on an increasingly sectarian character, with Assad’s mainly Sunni-Muslim opponents backed by Sunni Arab states, while Shi’ite Iran supports Assad, a member of the minority Alawite sect, an offshoot of Shi’ite Islam.