The head of Egypt’s military took a tough line Sunday on the Muslim Brotherhood, warning that he won’t let the fundamentalist group dominate the country, only hours after U.S. Secretary of State Hillary Rodham Clinton urged him to work with Egypt’s elected Islamist leaders.

Clinton’s visit to Egypt underscored the difficulty Washington faces in trying to wield its influence amid the country’s stormy post-Hosni Mubarak power struggles.

Islamist Mohammed Morsi, a longtime Brotherhood figure, was sworn two weeks ago as Egypt’s first democratically elected president. Led by Field Marshal Hussein Tantawi, the military handed over power to him June 30 after ruling Egypt for 16 months. The military, however, dissolved the Brotherhood-led parliament and stripped Morsi of significant authorities in the days before his inauguration, while retaining overwhelming powers for itself, including legislative power and control of the writing of a new constitution.

The United States is in a difficult spot when it comes to dealing with post-Mubarak Egypt — eager to be seen as a champion of democracy and human rights after three decades of close ties with the ousted leader despite his abysmal record in advancing either.

This has involved some uncomfortable changes, including occasional criticism of America’s longtime faithful partners in Egypt’s military as it grabs more power and words of support for Islamist parties far more skeptical of U.S. intentions in Egypt and the rest of the Middle East.

That has fueled accusations among some Egyptians who back the military or oppose Islamists that Washington is promoting the rise of the Brotherhood to power. Protesters chanting against the U.S. — sometimes reaching several hundred — have sprung up at several sites where Clinton visited this weekend. On Sunday, protesters threw tomatoes, water bottles and shoes at her motorcade as she left a ceremony marking the opening of a new U.S. consulate in the Mediterranean city of Alexandria.

At the ceremony, Clinton denied the U.S. supports any particular party. She also called for religious tolerance and respect of minorities in the new Egypt — a major concern among the Christian minority, women and secular liberals who fear restrictions if the fundamentalist Brotherhood wields power. 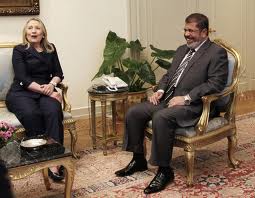 “Democracy is not just about reflecting the will of the majority,” she said. “It is also about protecting the rights of the minority.”

“Real democracy means that no group or faction or leader can impose their will, their ideology, their religion, their desires on anyone else.”

Still, Clinton does want the military to work with Morsi and his Islamist allies on a full transition to civilian rule. But with the U.S. having already approved another massive delivery of military aid, it was unclear what leverage Washington has as it seeks to stabilize Egypt and build a new relationship with America’s once ironclad Arab ally.

This weekend, she tried to stake out a middle ground.

Meeting with Morsi on Saturday for the first time, she called for consensus. Without taking a position on the specific disputes, she urged Tantawi to return the armed forces to a “purely national security role,” as she termed it.

But her criticism of the military was muted. She commended it defending lives during the Jan. 25-Feb. 11, 2011 revolution against Mubarak and for the progress Egypt made under its interim leadership, which included free and fair elections.

Still, after talks with Clinton on Sunday, Tantawi made clear the military will not allow the Brotherhood to hold sway, though he didn’t specify the group by name.

“Egypt will never fall. It belongs to all Egyptians and not to a certain group — the armed forces will not allow it,” he warned in comments to reporters after a handover ceremony for the transfer of command of the armed forces’ 2nd Field Army in the Suez Canal city of Ismailia.

“The armed forces will not allow anyone, especially those pushed from outside, to distract it from its role as the protector of Egypt,” he said. “The army will never commit treason and will continue to perform its duties until Egypt reaches the shores of safety.”

The U.S is looking to safeguard its interests in the region — from counterterrorism cooperation to Arab-Israeli peace efforts. But the deepening paralysis and lack of clarity over the leadership in Egypt has put much of its agenda on hold. Clinton headed Sunday evening to Jerusalem, where she is tackling another realm where Washington’s influence has failed to bring a breakthrough, reviving Israeli-Palestinian negotiations.

Egypt’s military and the Muslim Brotherhood, the country’s strongest political force, are in a competition over power that has intensified with Morsi’s winning of the presidency last month. Days before he was sworn in, the Brotherhood-led parliament was dissolved and the generals gave themselves legislative and budgetary authority and control over the process of drafting a new constitution, while severely limiting the president’s authority.

Tantawi, Mubarak’s defense minister for 20 years, is the most senior of the generals who took power after the longtime leader’s ouster 17 months ago. Under their tutelage, however, the military came under harsh criticism from the youth groups behind Mubarak’s ouster. The military is accused of doing nothing to stop a surge in crime, a faltering economy and of killing scores of protesters.

The military and the Brotherhood have bad blood since the 1950s, when then-president Gamal Abdel-Nasser jailed the group’s leaders and hundreds of its members. He ordered another crackdown in the early 1960s, jailing some again and executing a few. Mubarak spent most of his years in office chasing after the Brotherhood, jailing thousands.

Morsi’s efforts to reconvene parliament suffered a setback Saturday, when an appeals court said it stood by another court’s ruling that the chamber was invalid because a third of its members were illegally elected.

Morsi defied that ruling and ordered the legislature to reconvene last week. During a brief session on Tuesday, speaker Saad el-Katatni referred the constitutional court’s ruling to the country’s highest appeals court for a legal opinion.

After a lengthy discussion on Saturday, the appeals court refused to take up the case, saying it had no jurisdiction over the implementation of the constitutional court’s ruling.

It is not clear yet how Morsi planned to respond to the latest setback to his efforts to assert his authority. Another crisis was looming in the run-up to court rulings expected on Tuesday over the legitimacy of a 100-member panel elected by the dissolved legislature to draft a new constitution.

The administrative court on Tuesday is also likely to refer to the Supreme Constitutional Court to rule on the legality of parliament’s mostly toothless upper chamber. The higher court is vrtually certain to rule against it because it was elected under the same law declared unconstitutional by the Constitutional Court.