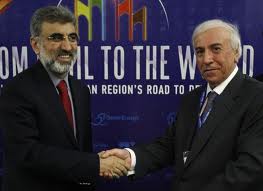 Baghdad warned Turkey on Sunday that its separate oil deal with Iraq’s northern self-ruled Kurdish region could damage trade relations, the latest sign of tension between the two neighbors.

This month, Iraq’s Kurds announced that they have started exporting crude oil and gas to Turkey. The goal is to barter it for refined petroleum products to meet domestic demand.

The deal is part of a bigger agreement the Kurdish government negotiated and signed with Turkey in May without going through Baghdad. The agreement envisions the Kurdish region exporting not only oil but natural gas through a web of pipelines through Turkish territory to the international market.

“Exporting oil from the Kurdistan region to Turkey is illegal and illegitimate,” Iraqi government spokesman Ali al-Dabbagh said in a statement. “The oil and gas are the property of all Iraqis and those exports and revenues must be managed by the federal government which represents all Iraqis,” al-Dabbagh added.

He accused Ankara of “participating in the smuggling of Iraqi oil … and this issue will affect the relations between the two countries, especially the economic ones.”

The Kurds and the Arab-led government in Baghdad have been at loggerheads over the right to develop and export the north’s natural resources. Baghdad maintains that the region has no right to sign deals unilaterally and that exports must go through the state-run pipelines, while Kurds argue that the constitution does in fact give them the right to sign agreements without consulting Baghdad.

The Kurds have gone ahead and unilaterally signed scores of oil deals. Baghdad keeps a blacklist of the companies involved.

In early 2011, the two sides reached a tentative agreement by which the Kurds send the oil to Baghdad. But the exports were halted in April by the Kurds, who claimed that Baghdad was withholding revenues. The central government in turn accuses the Kurds of keeping billions of dollars that ought to go into state coffers and also of smuggling oil on the side. It has threatened to cut the Kurdish region’s share of federal funds.

Baghdad and Ankara for their part have seen their relations strained after Iraq’s fugitive Sunni vice president Tariq al-Hashemi, who faces terror charges, sought refuge in Turkey since early 2012. Al-Hashemi says the charges are politically motivated.

Another point of contention is the uprising against the regime of Syrian President Bashar Assad. Ankara wants him to leave, while Baghdad, which has close ties to Assad’s ally Iran, has been hesitant to take a stand on the Syrian conflict.

Also Sunday, Baghdad signed a preliminary deal with a Pakistani company to explore for natural gas in the country’s east, the latest move by the war-torn country to develop its vast natural resources after decades of war, U.N. sanctions and neglect.

In May, Iraq awarded Pakistan Petroleum the right to explore for gas in the 6,000-square-kilometer (2300-square-mile) Block 8 in Diyala province. The company will be paid $5.38 for each barrel of oil equivalent.

The contract was signed at the Oil Ministry in Baghdad and it will be sent to the Cabinet for final approval. The contract is one of four Iraq awarded in the latest bidding round to search for oil and gas. Others will be signed this month.

Since 2008, Iraq has awarded 15 oil and gas deals to international energy companies, the first major investments in the country’s energy industry in more than three decades.

The goal was to boost daily production from about 3 million barrels now to 12 million barrels by 2017. But Iraq is mulling whether the target should be revised downward to fewer than 10 million barrels, considering a possible drop in demand on oil in the international market and infrastructure bottlenecks.