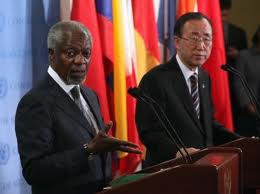 UNITED NATIONS Secretary-General Ban Ki-moon and international envoy Kofi Annan stepped up pressure on the divided U.N. Security Council on Friday, urging that it demand a halt to the escalating violence in Syria and promise “consequences” if the conflict doesn’t end.

The U.N. chief and the joint U.N.-Arab League envoy to Syria renewed their appeals for Security Council action following Thursday’s attack on a poor farming village in Hama province, which they strongly condemned.

They accused the Syrian government of violating Security Council resolutions by using heavy weapons, including artillery, tanks and helicopters, in the attack on Tremseh, killing scores of people in what rebels claim was among the worst single events in the uprising.

Ban sent a letter Friday to the Security Council, which was obtained by The Associated Press, and enclosed a separate letter from Annan urging Security Council action to help end the 16-month conflict.

Under Annan’s six-point peace plan – which was endorsed by the council but never implemented – the Syrian government was to withdraw troops and heavy weapons from populated areas and halt all violence, to be followed by a cessation of hostilities by the opposition.

The council is debating a new Security Council resolution on Syria, spurred by the July 20 expiration of the mandate for the U.N. observer force there and the failure of the Annan plan.

Russia and Britain have circulated rival texts, and Ban and Annan’s comments indicated a strong preference for the Western-backed British draft.

It threatens non-military sanctions against President Bashar Assad’s government if it doesn’t withdraw troops and heavy weapons from population centers within 10 days. The proposed resolution is under the U.N. Charter’s Chapter 7, which can be enforced militarily.

Russia said Thursday it will oppose any resolution on Syria that is militarily enforceable, calling it “a red line.”

Moscow’s draft resolution calls for the “immediate implementation” of the Annan peace plan and the guidelines for a political transition approved at a meeting in Geneva last month, but makes no mention of sanctions, saying the council will assess implementation and “consider further steps as appropriate.”

Annan’s letter recalled that when he briefed the U.N. Security Council on Wednesday he stated that “the government has increased its operations – with shelling, mechanized infantry, and the use of helicopter gunships, including in population centers.”

He said the attack on Tremseh is “another grim reminder that the council’s resolutions continue to be flouted.”