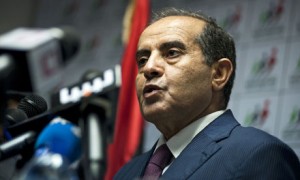 Libya’s National Forces Alliance is poised for a landslide victory in the country’s elections after results announced yesterday by the High National Election Commission in Tripoli.

With 98 percent of votes counted, the Alliance, led by Libya’s wartime prime minister Mahmoud Jibril, has won 16 of 20 party-list constituencies while the Muslim Brotherhood’s Justice and Construction party gained one.

“I cannot specify whether we will announce the final preliminary results tomorrow or the day after tomorrow,” Nuri Al Abbar, head of the election commission, said yesterday.

The latest results repeated a pattern seen earlier this week, with the the National Forces Alliance gaining 78,000 votes in the Abu Salem district of Tripoli, the nation’s capital, compared to 12,000 for Justice and Construction.

These figures follow the July 11 victory in Libya’s second city, Benghazi, capital of the oil-rich eastern province of Cyrenaica, where Jibril won 95,000 eclipsing Justice and Construction’s 16,000.

The effective capture of both Tripoli and Benghazi means Jibril can expect to gain more than 60 percent of the 80 available seats reserved for political parties in the 200-member National Congress.

Forming a workable coalition government will depend on the ability of political parties to form a majority coalition combining the party seats with the 120 seats reserved for individual candidates.

Along with the Muslim Brotherhood, one of Libya’s most prominent Islamists, Abdulhakim Bilhaj, also failed to have a impact with his Al Wattan, or The Nation, party.

Libyans went to the polls on July 7 in their first free national election in more than 40 years, amid political violence that’s hampered efforts to rebuild. Libyan Islamist groups had sought to emulate the success of counterparts in Tunisia and Egypt, where the Muslim Brotherhood-backed Mohamed Mursi was elected president last month.

Fragile security in post-revolutionary Libya has been illustrated in recent weeks by clashes between rival militias in Kufra and Sabha in the south, Benghazi in the east, Zintan in the west and at Zuara on the Tunisian border, while U.S., British and Red Cross targets have been attacked. Protesters last week closed three oil ports to complain about what they say is economic and political marginalization of Libya’s oil-rich eastern province of Cyrenaica. That action cut crude exports by about 300,000 barrels a day.

The Justice and Construction party says it has been the victim of campaign trickery by opponents and of propaganda during four decades of Qaddafi’s rule.

Jibril, who taught strategic planning at the University of Pittsburgh after earning his doctorate in 1985, became head of national planning under Qaddafi in 2007 and worked with his son Saif al-Islam on a new constitution.