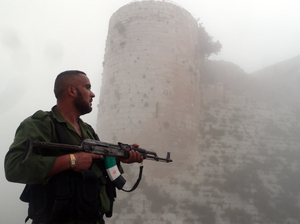 At this isolated part of the Turkish border, there’s just one Turkish guard, a fence and, beyond an olive grove, Syria.

The Syrian side is just a short walk, perhaps 10 minutes. The area looks completely calm and there is no sign of the Syrian military.

Abu Amar, a rebel who has fought in Syria for five weeks, walked across this field from the Syrian village of Atma, which is now serving as a rebel headquarters. He says much of the northwestern province of Idlib is now controlled by the rebels, and it has become easy to move back and forth between Syria and Turkey here.

“Actually we have a buffer zone now. I mean it’s not declared by the Turkish government,” he says. “People transport arms freely. The Turks are closing their eyes. We bring our wounded people here; we go back and forth and nobody bothers us at all.”

There are now more than 35,000 Syrian refugees living in camps inside Turkey, along the Syrian border, with several hundred more arriving every day. As the fighting in Syria escalates, these camps have become logistic bases for rebel fighters.

Syrian Troops Stay Away From Border

In June, Turkey moved anti-aircraft guns along its southern border after Syria shot down a Turkish jet over the Mediterranean. The effect has been the creation of a kind of no-fly zone for Syrian army helicopters that were patrolling the border. It is much safer now — for the rebels in northern Syria — and for Syrians who live in border camps just inside Turkey.

Refugee camp doesn’t quite describe the Kilis camp. It’s more like a city made up of shipping containers and can house 12,000 people. There are banks, schools and food markets, paid for and protected by the Turkish government.

When many of these Syrians first left their country, the trip was dangerous and long. Now, the picture is much different. The traffic goes both ways, and it’s a relatively safe journey.

Haj Nasr, who invites us to his camp home, says he now goes to northern Syria a couple times a

“We go back to bring families, children,” he says.

He has become a logistics chief for the rebels in his village. When a Syrian government soldier defects, Nasr gets a call.

“We took them to a safe place. They will take some rest and go back to the fight [for the rebels],” he says.

Mahmoud Mosa, a former headmaster of a school in northern Syria, joins the conversation, saying it was too dangerous to go back into Syria for the past year. But then about a month ago, he walked right in.

Asked if the Syrian army is getting weaker, he says, “Yes, because I was there [in northern Syria]. I know the army is weaker and weaker.”

Mosa is a teacher not a fighter. He gathers data for Western human rights organizations documenting atrocities and deaths. He says he hopes leaders of the Assad regime will eventually be put on trial. He confirms that rebels are in control in some northern areas, but that it’s not yet time to take his family home.

“I want my children to stay here, it’s safer for them, this camp is for families,” Mosa says. “But young men can do something inside [Syria].”

The population in the camp is mostly women and children. The classrooms are packed, with Turkish teachers guiding the lessons. When the kindergarten students are asked to draw, they draw scenes of war that they witnessed in their homeland.

Asked where they’re from, they rattle off places that have been hardest hit by the Syrian army: Homs, Jisr al-Shughour, Khirbet al-Jouz.

At their home, Mosa and his children watch a Turkish soap opera while huddled near a fan to keep cool in the dry summer heat.

Mosa says the rebel operation — the flow of arms and medical care — has improved in recent weeks. The camp has become a rear base for the fight against the regime.

“They are more organized,” he says of the rebels. “They come here to see their children and families every week, every 10 days, and then they go back to Syria,” he says.

Still, the Syrian army is waging a punishing offensive across the rest of the country. The undeclared safe zone in the north remains a limited success. So far, the rebels have been unable to expand the territory under their control.