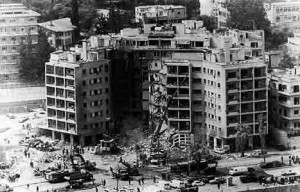 A US federal judge has ordered Iran to pay more than $813 million in damages and interest to the families of 241 US soldiers killed in the 1983 bombing of a Marine barracks in Lebanon. “After this opinion, this court will have issued over $8.8 billion in judgements against Iran as a result of the 1983 Beirut bombing,” Judge Royce Lamberth wrote in a ruling this week, a copy of which was seen Friday by AFP.

“Iran is racking up quite a bill from its sponsorship of terrorism,” the Washington judge added, noting that “a number of other Beirut bombing cases remain pending, and their completion will surely increase this amount.” On October 23, 1983, 241 American soldiers, including 220 Marines, were killed in Beirut when a truck packed with explosives rammed through barricades and detonated in front of the US barracks near Beirut’s international airport.

The attack was one of the deadliest ever against Americans. The same day, in a co-ordinated attack, 58 French paratroopers were killed by a truck bomb at the French barracks in Beirut. The twin bombings have been blamed on Lebanese Shiite militia Hezbollah, which is backed by Iran.

Lamberth, whose ruling was delivered Tuesday, wrote that “no award – however many billions it contained – could accurately reflect the countless lives that have been changed by Iran’s dastardly acts.” The nearly $813.77 million verdict is the eighth against Iran resulting from the 1983 bombing. In 2007, under a law allowing foreign governments to be sued in US courts, the same judge ordered Iran to pay $2.65 billion to victims’ families, an amount he wrote at the time “may be the largest ever entered by a court of the United States against a foreign nation.”

“The court applauds plaintiffs’ persistent efforts to hold Iran accountable for its cowardly support of terrorism,” Lamberth wrote in this week’s ruling. “The court concludes that defendant Iran must be punished to the fullest extent legally possible for the bombing in Beirut on October 23, 1983. This horrific act impacted countless individuals and their families, a number of whom receive awards in this lawsuit,” the federal court in Washington added.