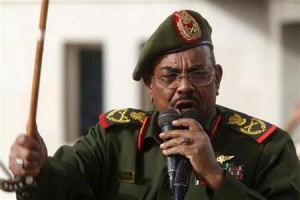 President Omar Hassan al-Bashir said on Saturday Sudan’s next constitution would be “100 percent Islamic” to set an example for neighbouring countries, some of which have seen religious parties gain power after popular uprisings.

In a speech to leaders of the mystical Islamic Sufi tradition in Khartoum, Bashir suggested Sudan’s new, post-secession constitution could help guide the region’s political transformation.

“We want to present a constitution that serves as a template to those around us. And our template is clear, a 100 percent Islamic constitution, without communism or secularism or Western (influences),” said Bashir.

“And we tell non-Muslims, nothing will preserve your rights except for Islamic sharia because it is just,” he said.

Bashir, facing small-scale protests calling for him to step down, said a committee made up of “all parties, religious sects and Sufis” would be set up to draft a constitution.

That appeared to be a move to assuage resentment by other opposition parties – many of which are still dominated by Islamist figures – over Bashir’s reluctance to loosen the grip of the ruling National Congress Party.

He did not give a date for the new constitution.

Following the 1989 coup that brought Bashir to power, Sudan introduced laws that took sharia as their main source.

Already, floggings are a common punishment in Sudan for crimes like drinking alcohol and adultery.

Sentences of stoning are rare, although in May a Sudanese woman was sentenced to death by stoning for adultery, sparking condemnation from human rights lawyers. Similar sentences in the past have not been carried out.

Bashir has been in power for the last 23 years and is one of Africa’s longest-serving leaders. He is wanted by the International Criminal Court for war crimes in Darfur, charges the government says are politically motivated and baseless.

Sudan’s opposition parties have called for strikes, sit-ins and demonstrations to topple Bashir’s government, throwing their weight behind recent anti-austerity protests, which have also involved calls for greater freedoms.

However, they have not yet sent their supporters out to the streets.