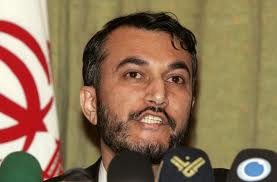 Iran’s deputy foreign minister said on Sunday that forcing Syrian President Bashar al-Assad to step down and go into exile would be a “joke,” warning an attack on his country would be “stupid” and “catastrophic.”

“Iran supports Assad’s reform plans and the talk about forcing him to go into exile is a joke,” Hossein Amir Abdollahian told reporters in Amman, where he invited King Abdullah II to attend an August summit of Non-Aligned Movement.

“Military action against Syria is unlikely and if this happens it would be stupid. Syria can defend itself without Iran’s help. Any non-political solution would bring catastrophe to the entire region,” he said.

French Foreign Minister Laurent Fabius said on Friday his country, Russia and the United States are not ready to host Assad in exile, while US Secretary of State Hillary Clinton on Sunday warned time was running out to save Syria from a “catastrophic assault.”

“Iran could be part of a solution to the Syrian issue. It has provided suggestions to Kofi Annan,” said Abdollahian of the UN and Arab League envoy.

Annan arrived in Damascus on Sunday after admitting that his peace plan has so far failed to end nearly 16 months of carnage.

“I think that meetings on Syria that are held in some countries seek to make sure the crisis in Syria continues. The Syrians must determine their own fate,” Abdollahian added.

“Iran backs all efforts to address the crisis and help Assad’s reform plans, but unfortunately we sense bad intention.”

Iran is Assad’s chief regional ally, supplying him with humanitarian and financial aid.

Some Iranian and US reports have said Iranian military personnel were in Syria and helping in the crackdown against opposition groups, although Tehran officially denies that.

More than 17,000 people, including 11,815 civilians, have been killed in Syria since the outbreak of the revolt in March 2011, according to monitors.