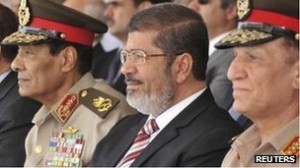 Egypt’s President Mohammed Mursi has ordered parliament to reconvene, a month after it was dissolved.

Mr Mursi, whose Muslim Brotherhood won most seats, said the chamber should reconvene until a new election is held.

The military had enforced a court order last month dissolving parliament because party members had contested seats reserved for independents.

The military council was due to meet for an emergency session to discuss the presidential decree.

The BBC’s Jon Leyne in Cairo says Mr Mursi’s decision may put him on a collision course with military leaders.

The military took over the reins of power last year, after the revolution that ended strongman Hosni Mubarak’s 30-year rule. 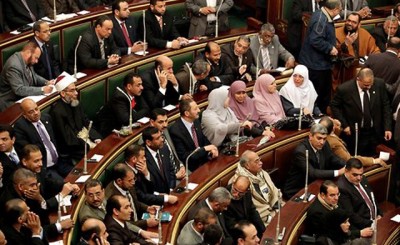 The army move was initially welcomed by many of the anti-government protesters, but its presence became increasingly unpopular as critics accused its leaders of wanting to hold on to power.

But our correspondent says the MPs would first have to get past police and military guards, who are keeping them out of parliament.

But before his inauguration, the military had granted itself sweeping powers.

The commanders’ constitutional declaration stripped the president of any authority over the military, gave military chiefs legislative powers, and ordered that the military would install a panel to write a new constitution.

However, in his presidential decree, Mr Mursi said the recalled parliament would write the new constitution.

A new election would be held 60 days after the constitution had been agreed by referendum, the decree said.

The Muslim Brotherhood has consistently opposed the decision to dissolve parliament.

But analysts say it is unclear whether the president has the authority to reinstate parliament.

This move by President Mursi seems to suggest he is on course for a new confrontation with the military council.

The president and the Muslim Brotherhood have never accepted the decision by the military to dissolve parliament. Now he is using his authority as newly installed president to try to overturn it.

But the move is also contradictory. By the same presidential edict, Mohammed Mursi has called for new parliamentary elections after a new constitution is in place. That’s exactly what the military have promised, and most commentators believe the Brotherhood would lose seats in parliament as a result.

So it is just possible that this move by the new president is actually part of a more complicated deal under which, perhaps, parliament would meet briefly then be dissolved. Confrontation or compromise, all should become clear very soon.