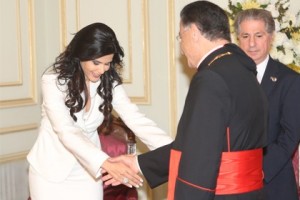 “We hope this meeting would form a basis for a phase where we all [foster] principles that preserve Lebanon, especially amid the [current] domestic and foreign difficulties.”

“We discussed the Syrian issue… [and we all] agreed that Lebanon should not be dragged into the current struggle in Syria.”

“Amid the [changes] in the Arab world, we asked the Patriarch to remain unbiased and keep the Patriarchate beyond all conflicts and choices.”

The Bcharre MP added that the meeting was “historical,” and that she was “amazed by the Patriarch’s openness.”

Geagea also said that “the meeting was concluded with an agreement that will not be revealed to the media.”

Rai came under fire last September from the opposition March 14 parties but won praise from March 8 politicians for his comments during his visit to France . “Syrian President Bashar al-Assad is open-minded and should be given more chances to implement the reforms” he announced.

He also indirectly defended Hezbollah’s arms by linking the party’s arsenal to the termination of Israeli occupation of Lebanese territory and the return of Palestinian refugees to their homeland . Even MP Walid Jumblatt who defected from March 14 alliance was very critical of Rai’s statements.”

The Patriarch also faced criticism by March 14 coalition, especially LF leader Samir Geagea after the former said that “the closest thing” to democracy in the Arab world was Syria and that he was against “turning the Arab Spring into winter.”

The situation between March 14 and Rai deteriorated to the extent that some started calling him Aounist , in reference to Hezbollah’s ally MP Michel Aoun