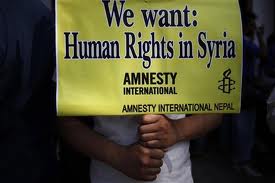 The Obama administration on Tuesday added Syria to the list of countries that could face U.S. sanctions for not doing enough to combat trafficking. Sixteen other nations were included among those not even making significant efforts to meet minimum standards, while Venezuela and Myanmar were among those removed from the group of worst offenders.

In its annual Trafficking in Persons report, the State Department said that Syrian President Bashar Assad’s regime fails to investigate and punish offenses or offer protective services to victims. It says thousands of women, from countries such as Indonesia, the Philippines and Somalia, have been trafficked into forced labor and prostitution in Syria after being falsely recruited by employment agencies as domestic servants.

Traffickers in Syria particularly prey on Syria’s large Iraqi refugee population, said the report, which analyzed conditions in more than 180 nations, including the United States, and ranked them in terms of their effectiveness in fighting what many term modern-day slavery. The State Department says up to 27 million men, women and children may live in such bondage around the world.

“These victims of modern slavery are women and men, girls and boys, and their stories remind us of what kind of inhumane treatment we are still capable of as human beings,” Secretary of State Hillary Rodham Clinton said. “Some are lured to another country with false promises of a good job or opportunities for their families. Others can be exploited right where they grew up, where they now live.”

Seventeen countries in all were included in the worst-offending group of countries not reaching minimum international standards to fight the scourge, which claims mainly women and children as victims, and not making any significant effort to do so. That’s down from 23 last year. More than 40 other nations were placed on a watch list that could lead to sanctions unless their records improve.

Venezuela still doesn’t fully comply with minimum standards to eliminate trafficking, but is now making an important effort, the report said. President Hugo Chavez’s government has clashed repeatedly with Washington over the last decade, but it was commended it for strengthening anti-trafficking laws, undertaking public information campaigns and training law enforcement and borders personnel in prevention.

“However, prosecution and conviction efforts appeared to remain weak, and specialized victim services were lacking,” said the report, which included Venezuela on the U.S. watch list. The efforts of Nicaragua, another Latin America country with a leftist government that has been at odds with the U.S., also were recognized. It joined the list of countries in full compliance.

Myanmar, also known as Burma, was urged to continue with its “unprecedented steps” to address trafficking after long being considered among the world’s worst respecter of labor rights.

Luis CdeBaca, U.S. ambassador-at-large for human trafficking issues, said Burma’s status was upgraded after the government repealed an antiquated law that had been used to justify forced labor and replaced it with a law expressly forbidding the practice. The government made progress identifying and helping victims, and a national trafficking hotline introduced in September has led to the rescue of 57 victims.

Nevertheless, the report said many Burmese men, women and children traveling abroad for work are subjected to forced labor or sex trafficking, as trafficking by both private individuals and government officials “continues to be a significant problem.” The military conscripts child soldiers and is the leading perpetrator of forced labor within the country, particularly in conflict-prone ethnic areas.

U.S. NATO ally Portugal was dropped from the top tier into the list of countries not quite reaching minimum standards, while Israel was promoted to the top group.