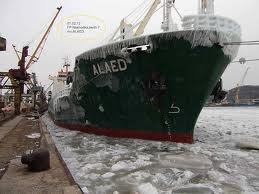 Reports from CNN and other news organizations have ricocheted across the globe concerning Russian ships allegedly on their way to the Russian-controlled port of Tartus in Syria carrying arms and, possibly, troops.

The stories unleashed a “fog of war” series of charges and denials that have sharpened tensions between Washington and Moscow.

Tuesday some facts became clearer, others even more confused.

The reports began surfacing almost a week ago after Secretary of State Hillary Clinton accused Moscow of sending attack helicopters to the regime of Bashar al-Assad, which she said would escalate the conflict in that country “quite dramatically.”

CNN and others reported the helicopters were aboard a Russian-operated ship, the MV Alaed, which sailed from the Russian enclave of Kaliningrad. The British government said Tuesday it appeared to have three Syrian Mi-25 helicopters aboard. The Russian government previously said the choppers were purchased by the Syrian government as part of older contracts and were being refurbished.

Tuesday, Pentagon spokesman Capt. John Kirby told reporters, “This was part of a long-standing contract that they had with the government of Syria to provide helicopters to the Syrian military.”

But he repeated the Obama administration’s view that – new or old – the helicopters can be used to kill Syrian civilians. “Any external support given to the Assad regime of a military lethal nature that … could allow them to harm people is intolerable and unacceptable,” he said.

But the ship apparently made it only to the waters off Scotland. It’s now reportedly on its way back to Russia after the British company that insured it withdrew coverage due to the nature of the shipment.

Pentagon officials told CNN last week that U.S. intelligence believes the Russians are sending another ship, the Nikolay Filchenkov, carrying weapons, ammunition and a small number of Russian troops to Syria to help fortify its naval base there as the situation in Syria continues to spiral out of control.

U.S. officials told CNN’s Barbara Starr that military spy satellites watched the vessel being loaded in a port on the Black Sea.

On Tuesday, the Pentagon said Moscow was actually preparing to dispatch a total of three vessels carrying supplies and possibly personnel to Syria, believed to be for resupply and protection for forces at the Russian base there.

“We have no indication that these vessels are being sent to Syria for any other purpose (than that) which the Russian military has acknowledged themselves,” Kirby noted. “That it’s for resupplying to help with force protection at that facility.”

But the Russian Defense Ministry on Tuesday denied other media reports that a large landing ship, the Kaliningrad, which belongs to the Baltic fleet, is being prepared to sail to the port in Tartus.

“The only true data in those reports is that the large landing ship Kaliningrad is a part of the Russian Baltic fleet,” the ministry said. “Currently it takes part in Kiel week” – an annual sailing event – “and then it will be back to the port where it’s based. No routes to the Mediterranean are planned for it.”

What’s more, the Russian Defense Ministry charged, “The false information referring to unnamed source and satellite data that was published by the media last week was meant to escalate the situation in Syria, but not to reflect the reality.”

From the spokesman for the Russian Black Sea Fleet came another denial. Vyacheslav Trukhachev, based in Sevastopol, Ukraine, told CNN: “All ships from the Black Sea fleet are engaged in everyday activities and located within the ports where they are based. The Russian ship Caesar Kunnikov left the port of Sevastopol today for planned training and will be back in port tomorrow.”

The spokesman denied media reports quoting him as saying that Russian warships had set sail for Syria and that one of the warships was carrying a 150-strong contingent of marines and 25 tanks. He also denied saying the mission “would only be to evacuate Russian personnel and property from Syria.”