EGYPT’S MILITARY EXTENDS ITS POWER ON EVE OF VOTE 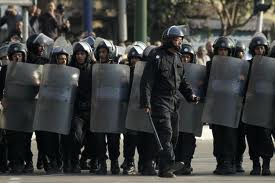 CAIRO — Egypt’s military rulers moved to consolidate power Friday on the eve of the presidential runoff election, shutting down the Islamist-led Parliament, locking out lawmakers and seizing the sole right to issue laws even after a new head of state takes office.

The generals effectively abandoned their previous pledge to cede power to a civilian government by the end of the month, prolonging the increasingly tortuous political transition after the ouster of Hosni Mubarak last year. The power play has also darkened the prospects that Egypt, the most populous Arab state and one that historically has had tremendous influence on the direction of the region, might quickly emerge as a model of democracy for the Middle East.

Their moves, predicated on a court ruling on Thursday and announced with little fanfare by the state news media, make it likely that whoever wins the presidential race will — at least at first — compete with the generals for power and influence. The military counsel also indicated through the official news media that it planned to issue a new interim constitution and potentially select its own panel to write a permanent charter. The generals have already sought permanent protections for their autonomy and political power.

The military’s power grab, which many critics have called a coup, presents a new obstacle to the ascent of the Muslim Brotherhood, the Islamist group that is Egypt’s largest political force. After 84 years in the shadows of secular monarchs and military autocrats, the Brotherhood dominated last fall’s parliamentary elections; it began drawing up plans to revise the Constitution and government ministries, and appeared poised to claim the presidency as well.

Then on Thursday, the nation’s highest court issued an order dissolving Parliament, on the grounds that political parties had wrongly been allowed to compete for the one-third of seats designated for individual candidates.

Now, even if the Brotherhood’s presidential candidate, Mohamed Morsi, wins the runoff, his power may be circumscribed by a military-issued interim constitution as well as the generals’ hold on legislative power, at least until new parliamentary elections are held.

The outcome of the race, however, remains impossible to predict. Mr. Morsi’s opponent, Ahmed Shafik, a former air force general and Mr. Mubarak’s last prime minister, was long considered an inside candidate to succeed Mr. Mubarak under the old one-party autocracy. Mr. Shafik has campaigned as a strongman who can restore order and hold back the Islamists. Many observers say he has benefited from favorable coverage and editorials in the state news media as well as from statements and actions by sitting public officials warning against the Islamists.

In response to the ruling on Parliament, the Muslim Brotherhood sought to portray the presidential runoff as the last stand of the revolution.

“Here comes the counterrevolution, plainly witnessed by all, so everyone knows that we are facing a defining moment and a critical turning point,” Mr. Morsi said Friday in a statement that was echoed by surrogates for his campaign. “We are now facing a heinous coup,” he added, calling it “the last card of counterrevolutionary players.”

Eschewing protests, Mr. Morsi urged supporters to join a “million-man march to the ballot boxes, because then the forces of darkness will not dare falsify your will.”

Brotherhood officials insisted that Parliament was still in business despite the soldiers guarding the doors. They continued to argue that the Supreme Constitutional Court had no authority to dissolve Parliament, citing precedents in which the previous Parliament had rebuffed such judicial interventions. They discounted the reports in the state news media that the military council had assumed legislative authority, and also wrote off the soldiers and the riot police officers barring entrance to Parliament.

“It is nothing more than a show of force,” said Jihad al-Haddad, an adviser to the Brotherhood’s chief strategist, Khairat el-Shater. “The Parliament is still intact.”

“We don’t know anything yet because this was a political decision and not a legal decision,” Mr. Haddad added, noting that Egypt remained under the convoluted authority of a hodgepodge of military declarations and pre-existing rules.

The impending presidential vote appeared to divert energy from protests, and a march to Tahrir Square drew a relatively small crowd of a few hundred.

Senator Patrick J. Leahy of Vermont, an influential Democrat, threatened to seek to withhold American aid to Egypt. The dissolution of Parliament “obviously throws into question the future of the transition,” he said in a statement. “I would not want to see the U.S. government write checks for contracts with Egypt’s military under the present uncertain circumstances.”

The results of the first round of the presidential election appear to make Mr. Morsi the favorite. He and other Islamist candidates combined won nearly half the vote, while Mr. Shafik and the other former Mubarak government official in the race, Amr Moussa, won only about a third. Mr. Morsi needs to peel off only a sliver of the votes given to other more secular candidates critical of the Mubarak government in order to win.

“By the numbers, Morsi should win, if the vote is free and fair,” said Samer S. Shehata, an Egyptian-American political scientist at Georgetown University.

Some outside the Brotherhood blamed its conservative leadership — mainly represented by its lead strategist, Mr. Shater — as having provoked the crackdown by moving too fast to take power rather than working in concert with others. Former members said the efforts by the Mubarak-appointed judges and generals to block the group’s electoral successes would only strengthen the hand of its conservative leaders.

“The leadership convinces itself and the members of a feeling of persecution — that the group is being tracked and hunted and restricted even when it has part of the power — and this feeling has always been used as an excuse,” said Mohamed Habib, a former deputy chairman of the Brotherhood. The attacks by government officials, liberals and the media enhance “the feeling of persecution,” he said, and weaken the argument that the group should open up.

Mr. Haddad, the adviser to Mr. Shater, said the Brotherhood always expected a long struggle to wrest power from the military and business elite. “It is not easy to uproot the military’s grip on the state,” he said. “We are planning for a 7- or 10-year process.”