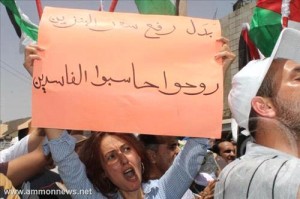 Thousands of Jordanians took to the streets on Friday calling for the government to resign over rising fuel prices and delays in introducing democratic reforms.

In a rare show of unity, Islamists, liberals, nationalists and youth activists demonstrated in eight of Jordan’s 12 provinces against a surprise government decision this week to raise fuel prices for the second time in less than 10 days.

In Amman, hundreds of activists called for the resignation of Prime Minister Fayez Tarawneh, who implemented austerity measures they claim serve the interests of the wealthy at the expense of “ordinary citizens.” Protesters also called for a probe into potential corruption inside the Royal Palace, accusing the King’s inner circle of embezzling millions through an unpopular privatisation of state-owned industries.

Protesters said there was a disconnect between King Abdullah II inner circle of advisors and the Jordanian street. “Leave the palace and see how Jordanians live,” they chanted.

They also demanded sweeping constitutional reforms. Some 20 lawmakers announced their resignation to protest a delay in political reforms.

Friday marked the third day of protests that started on Wednesday when fuel prices were hiked. The government says the price hikes are necessary to address a $6-billion budget deficit, which economists say could plunge the country into a financial crisis.

Earlier this month, the government raised electricity prices 150 per cent for several sectors and raised fuel prices by 9 per cent, triggering a wave of protests.