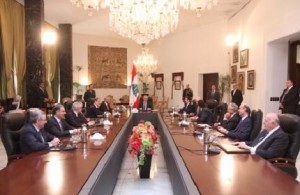 On Monday June 11, rival political leaders in Lebanon meet face-to-face for the first time since November 2010 in a new session of the National Dialogue talks . As per previous sessions , the most ambitious expectation of the talks is defusing the tension. This time the tension is due to the 15-month-old unrest in Syria.

President Michel Suleiman who invited the rival leaders of the Hezbollah-led March 8 bloc and the opposition March 14 will chair the National Dialogue session at Baabda palace which is expected to kick off at 11:00am

Suleiman’s initiative has won strong support from Arab Gulf states and Western countries, who are concerned over Lebanon’s stability and fears of a spillover of the turmoil in Syria into the country.

The reason for the low expectations is the fact that the session will be boycotted by the Lebanese Forces, a key pillar in the March 14 coalition. Samir Geagea , the LF leader has dismissed the talks as a waste of time, saying it would not help solve problems facing the country and would not address the divisive issue of Hezbollah’s arms.

Another key absentee is Ghassan Tueni, the veteran Lebanese journalist, politician and diplomat who headed one of the Arab world’s leading newspapers, An-Nahar, for half a century. Tueni who died Friday at age 86, was one of the first members of the National Dialogue Committee .

Another reason for the low expectation is what Hezbollah MP Mohammad Raad said on Sunday. He told Al-Manar television that anyone who wanted to discuss Hezbollah’s arms was serving foreign schemes.

“All those who want to discuss the issue of the Resistance’s arms would be serving foreign Israeli-US schemes,” Raad who heads the Hezbollah parliamentary block said .

Hezbollah, which was credited with liberating Lebanese territories from Israel in 2000 was a very popular organization in Lebanon and throughout the Arab world. But according to analysts ever since its 2006 war with Israel, Hezbollah has become the main liability for Lebanon. In 2006 Hezbollah’s arms were used to try and bring down the government of former PM Fouad Siniora. In 2008 Hezbollah pointed its guns against the Lebanese people when it occupied more than half of Beirut and tried but failed to occupy Mt Lebanon . In 2011 it brought down the government of former PM Saad Hariri and reportedly used its arms to force progressive socialist party leader MP Walid Jumblatt and his parliamentary bloc to vote for their candidate Nagib Mikati as the new premier . Hezbollah’s current support for the Syrian and Iranian regimes is another main concern for the Lebanese people, analysts say.

In an interview with Al-Jadeed TV Sunday night Geagea reiterated the Lebanese Forces’ stance that the session would lead nowhere because it will not be serious.

“We will not go to this dialogue, but we might go to another dialogue if matters are serious. I am fully convinced that this [dialogue] is a waste of time and can lead nowhere.” Geagea who is bald added “after 40 dialogue sessions, I lost my hair.”

“We will not go to this dialogue, but we might go to another dialogue if matters are serious. I am fully convinced that this [dialogue] is a waste of time and can lead nowhere.” Geagea who is bald added “after 40 dialogue sessions, I lost my hair.”

Monday’s session comes two days after a delegation of March 14 headed by former PM Siniora handed Suleiman a memorandum outlining its stance on the dialogue talks and reiterating its call for the formation of a neutral salvation government to follow up the dialogue sessions and supervise next year’s parliamentary elections. Dubbed “a salvation initiative,” the memo also stressed the importance of addressing non-state arms, a clear reference to Hezbollah’s arms and the arms of Palestinians who are backed by the Syrian regime.