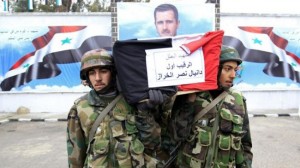 Rebel forces killed nearly 80 Syrian soldiers in the past few days and activists claimed Tuesday the toll was more than 100 in what appeared to be some of the heaviest losses for government troops since the uprising began 15 months ago.

The Britain-based Syrian Observatory for Human Rights, which has a network of sources on the ground, said 113 soldiers have been killed in clashes with rebel forces across the country since Friday. The figure was impossible to confirm independently, but the Syrian government confirmed nearly 80 soldiers had been killed over the past three days.

“The regime is suffering major losses,” said Rami Abdul-Rahman, head of the Observatory.

Syria’s uprising began with mostly peaceful protests, but a brutal government crackdown with tanks, machine guns and snipers led many in the opposition to take up arms. Now, the conflict has morphed into an armed insurgency.

Videos and photographs posted online by activists showed destroyed tanks and armored personnel carriers over the past several days. In a video posted online Saturday and said to be taken the Damascus suburb of Douma, an APC was torn to pieces and at least two charred bodies of soldiers were seen near the vehicle.

Syria’s state-run news agency, SANA, says nearly 80 soldiers were killed over the past three days. It said the dead include a brigadier general who was shot dead while on his way to work in the restive northern province of Idlib.

Activists say that more than 13,000 people have been killed since the crisis in Syria began in March last year.

The State Department says international envoy to Syria Kofi Annan will be going to Washington on Friday to meet with U.S. Secretary of State Hillary Rodham Clinton.

Annan is scheduled to brief an open meeting of the U.N. General Assembly on Syria on Thursday and then attend a closed Security Council meeting to discuss the latest developments. Annan has been pushing a six-point plan to ease Syria’s crisis calling for stopping killings and launching an inclusive political process.

A cease-fire never took hold and the violence has continued despite the presence of U.N. observers in the country.